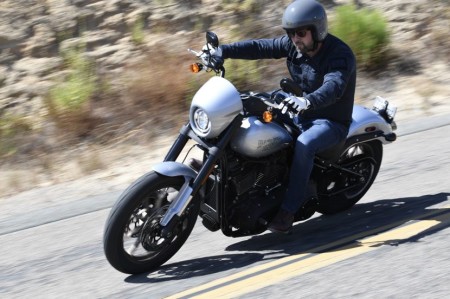 There will be a period in every biker’s life when they don’t quite know which Harley Davidson they’re looking at. Panhead? Shovelwhat? Knucklewho? It can be hard enough getting your head around the type of engine you’re looking at, let alone understanding the myriad model nomenclature. The one that you’re looking at on this screen is the Lowrider S, aka ‘The Sons of Anarchy one’, aka ‘The one that Harley stunt riders have on Insta’. 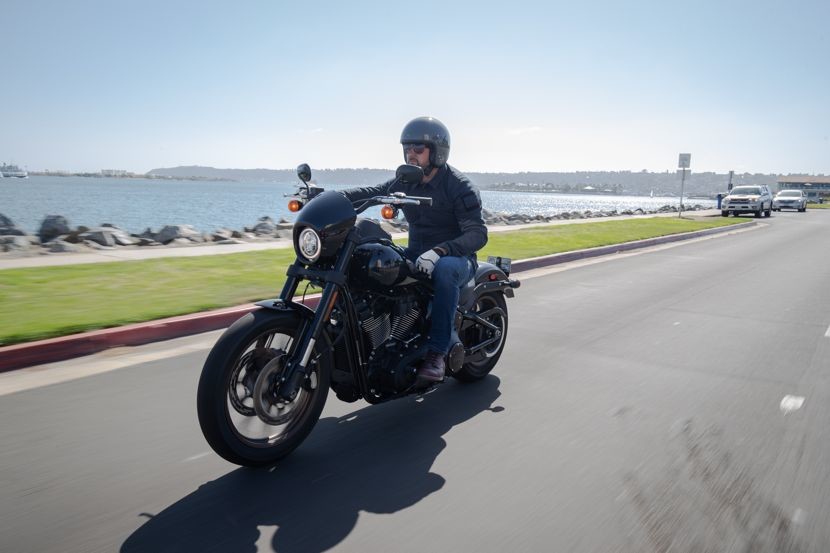 Obviously there’s more to it than that and for 2020, Harley Davidson has reworked the Lowrider S substantially. It sticks to the original 1977 Lowrider style, though. Offering a factory custom style that has a low seat, narrow, easy to reach bars and twin front discs.

This new Lowrider S bolsters the already stacked Softail range, which was massively updated for 2018. In short, a Softail Harley looks like it has a hard tail because you can’t see any rear suspension when in actual fact, there’s a monoshoc lurking underneath whichever of the eleven softail styles catches your eye.

Styling wise, Lowrider S is a funky looking thing. Two into two exhausts flank the lower right hand side of the bike, providing straight edges that accentuate the flowing look perfectly. There’s a distinctly 80’s vibe to the Lowrider S. If the Heritage Classic is a checked shirt and boots bike, the Lowrider S is trainers and a Fright Night T-shirt. The bronze finish on the wheels book ends various black hues and there’s a smooth, concaved flow from the bikini cowl front to the LED taillight, erm, tail. 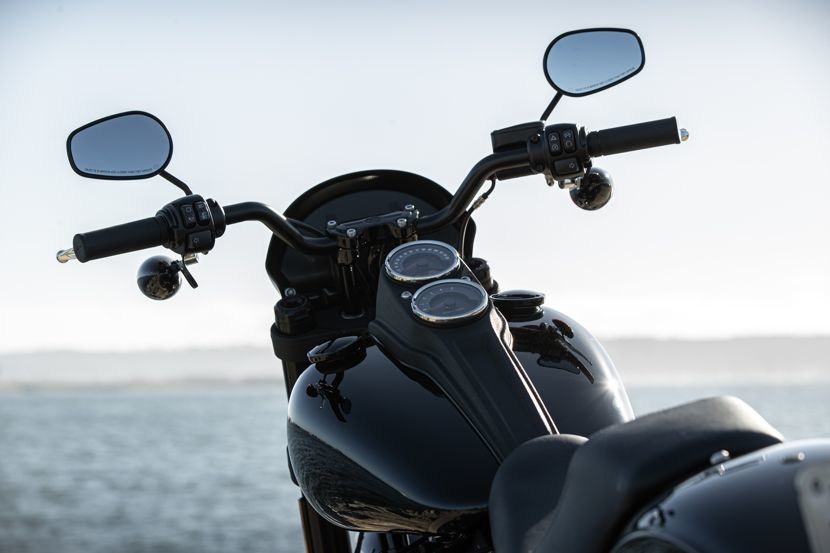 Clocks live on the tank rather than behind the headlight

The mid controls make complete sense when you skim a leg just 690mm over the seat and park your ass. There isn’t enough altitude directly under your bum for your feet to sit, so the mid way levers work well, as well as looking just right. The clocks sit lower than you’d expect. The cool looking headlight cowl has nothing behind it, instead you’ll find everything you need in two over and under clocks stacked on top of the 18.9 litre tank. 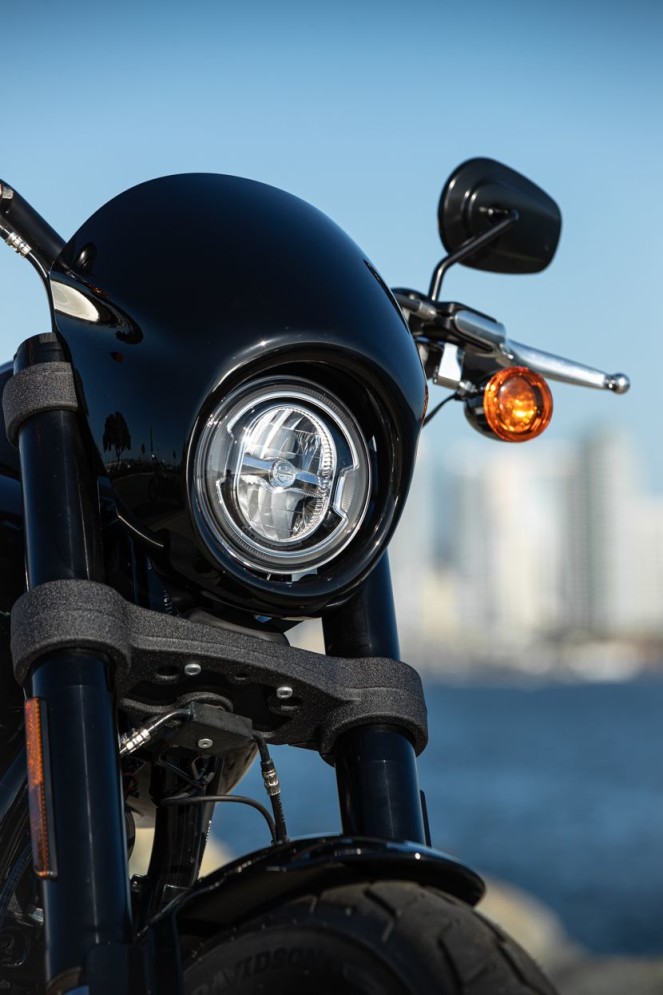 1980’s cool with the added benefit of an LED headlight

I struggled with the bars initially. They feel fairly narrow when you first get hold of them and it’s hard to work out how to get the right amount of input to get the desired output. Lowrider S is not an intimidating bike to ride though, those that are short in the leg will appreciate the roomy riding position and low seat height. 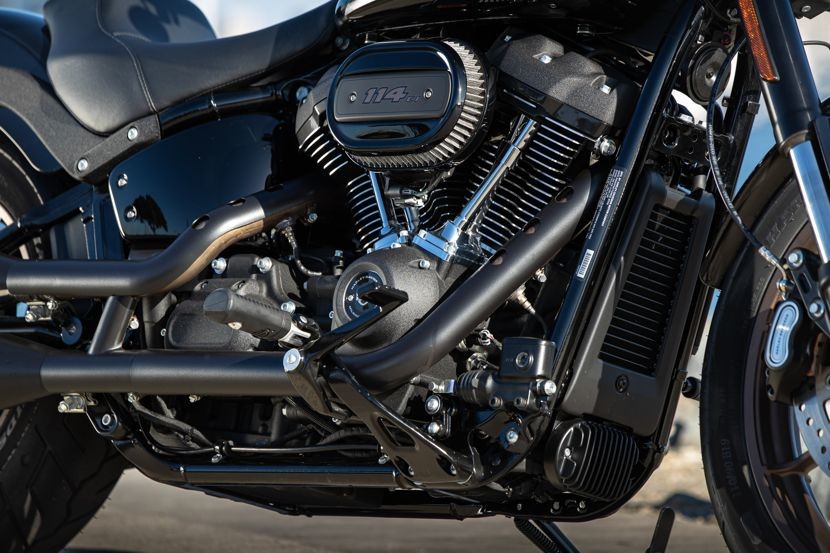 Harley has opted for the 114 inch Milwaukee Eight motor in this model. Torque is the primary feature, all 114ft lbs ft of it is available at three thousand RPM. Unlike other bikes in the Softail range, you can’t choose between the big 114 and the less big 107 inch motor. It’s no bad thing, the 1868cc variant in the Lowrider S will scratch all of your American big twin itches. Accidentally on purpose dial in too much throttle and the Lowrider S will snake away from the lights with a satisfying squeal and proper shove. There’s power too, it might not sound like much but the 92bhp that was available was handy for the couple of high speed overtakes we put in. For reference, cruising at 70 on the highway looking like a complete badass costs 2800rpm in top gear. 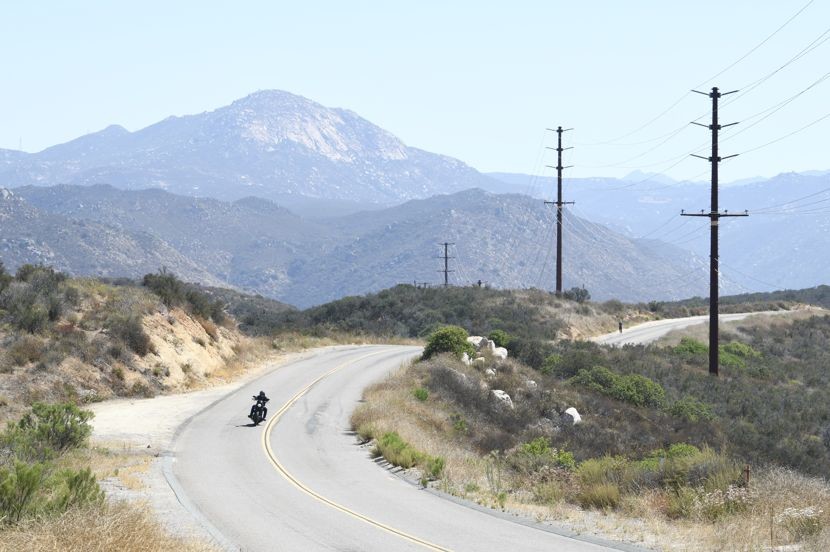 Possibly the coolest picture of Hogan ever taken

And cruise we did, out of San Diego (my new favourite place) and into some very un American style corners. One after the other, mostly billiard smooth and most definitely loads of fun. Those slightly narrow mx style bars sit on top of Showa forks and although my hands were just about in line with my shoulders, the steering input required was different to how I’d ride a bike with ape hanger bars that might have my hands hanging in a similar position. I think ape hangers have more flex in them than the set up on the Lowrider S. Off the top yoke sits a thick bar riser and the bars occupy a relatively shallow part of the space between hands and the front tyre. This gives a more connected feel, certainly more rigid than ape hangers and definitely more responsive. My best corners were the ones where I pushed the inside bar first, counter steering the thing onto the line I was looking for. Once there, the push on the inside bar became a pull on the outside bar in order to hold the line. Thankfully there’s no silly fat tyre out the back so the Lowrider S stays where you put it, rather than wanting to pop up all the time like the Breakout for example. Powering off corners on a fat wave of torque was great fun, as was trying not to deck the pegs out. A light scuff at the start of the day to find the limit was enough, I pride myself on not dragging bits of these bikes round every corner and found it was capable of carrying good corner speed without showering sparks everywhere. While I was coming off those corners on big handfuls of throttle, I decided that as much as I liked the look of these stock pipes, I think the first thing I’d look to accessorise is the exhausts. I wanted more noise. 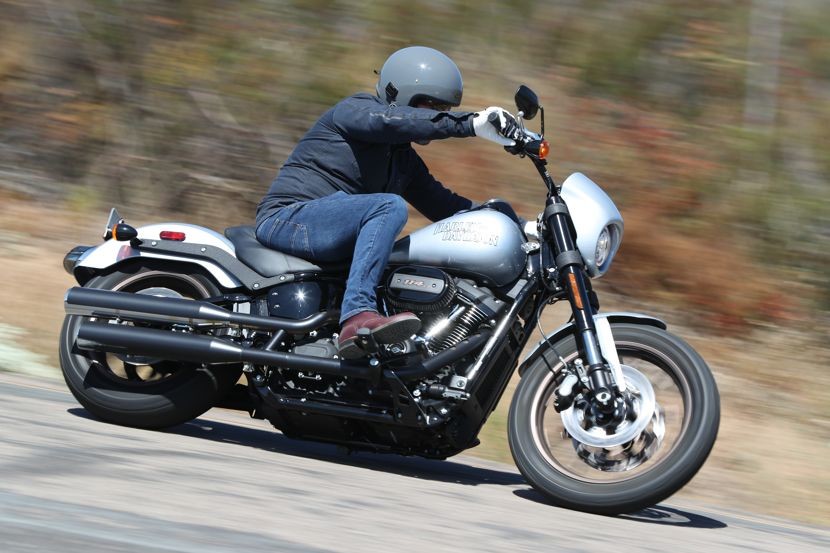 Far more comfortable than it looks

Sticking with the feel from the front end, the decision to run with a twin 300mm disc and four-piston caliper setup is a welcome one. The performance is strong, I’d say just a tiny bit too strong for the forks, which felt like they were diving through their stroke a little bit too fast if I did anything more than brush the brake lever on the way into a corner. The unadjustable Showa forks have a cartridge kit in them, but they’d benefit from a slightly stiffer spring or a couple of spoonfuls of Crisp n Dry in the top. I don’t want to sound like Miguel Duhamel (Google him), but there’s a reasonable chance we were riding these bikes faster than the majority of owners will do, maybe they wont feel the front end doing what I’m describing. Once the brake is released and you’re onto your line, the Lowrider S has great manners, which when you consider where your arms and legs are in relation to your bum is a commendable thing. The rake of the forks has been reduced by a couple of degrees thanks to the use of the Streetbob chassis in the Lowrider S. This reduction in rake pulls the front wheel closer to the centre of the bike, giving a sharper and more responsive front end but without causing any twitchiness in a straight line. 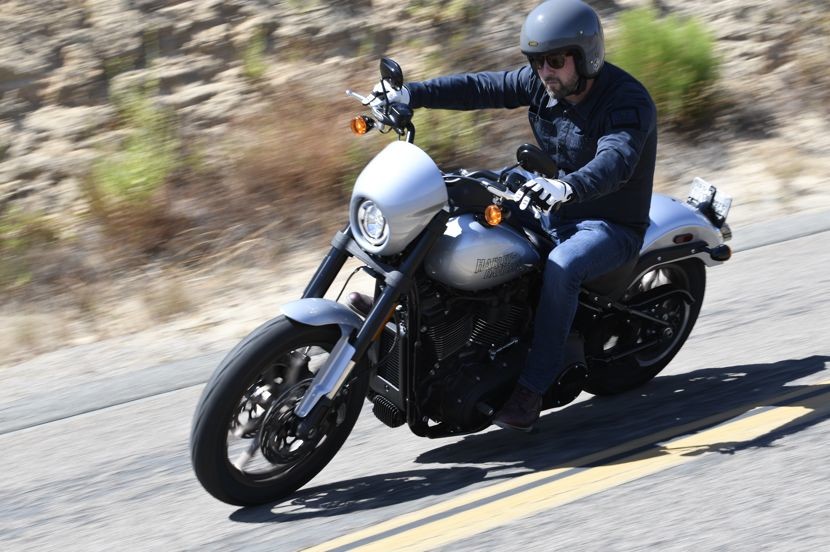 Front and back ends talk to each other now.

The back end feels perfect, more great work from Showa means comfort and control in equal measure. Like I said earlier, the use of a normal sized rear tyre really helps. The 180/70/16 rear suits the look and feel of the bike as much as it suits the 110/90/19 inch front. 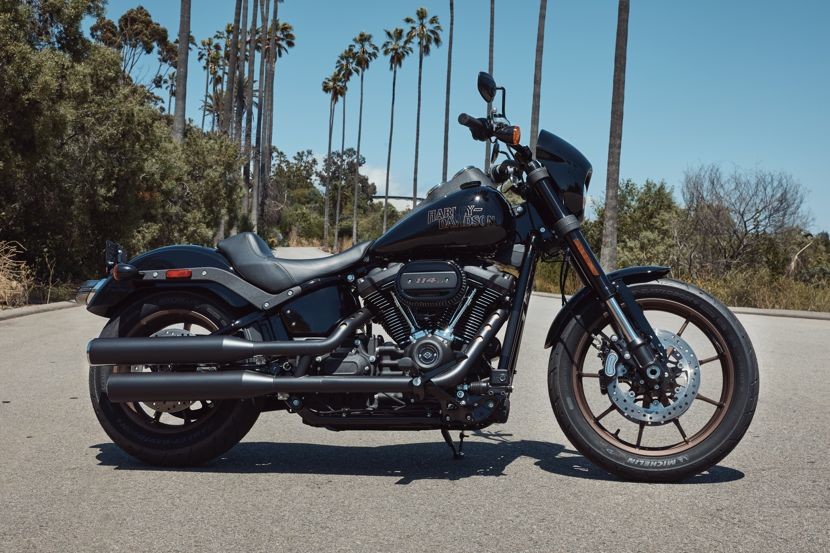 Dynamically, the Lowrider S puts in a solid performance. I’ve been writing about Harley Davidsons since I was in my mid twenties, I can remember when they felt hinged in the middle and would quite often disagree with you unless you were riding in a straight line. Those days are long gone. More important than pure performance for me is how bikes like this make me feel. My taste for Harleys has been developing over the last five years, I can always find something to like in any bike, but the list of ticks these things get in my mental checklist is growing. I’m slowly coming to realise that biking isn’t just about trying to ride faster than an email everywhere. Some of the scenery we took in outside San Diego was genuinely breathtaking, I know because I had the time and the brain space to look at it as it rolled by. If I was on a sportsbike, I’d have been chasing the horizon as fast as I could and only really looking where I need to. That’s literally not how you roll on a Harley. Don’t get me wrong, I wasn’t constantly on the lookout for a hippie commune to join so I could learn to play the bongos. I was spending this new found brain space on the important stuff. Will I ever load the perfect dishwasher? Why does the tv remote disappear the minute I walk out of the room and just where in the actual fuck is my 10mm socket? The Lowrider S is a performance bike for the soul, it gives you a real buzz without any of the fuss of hundred mph plus numbers. Don’t test ride one until you’re ready to, your brain will let you know when the time is right to try a Harley. That you’ve made it this far in this review tells me that you’re not too far away, go with the flow and enjoy it, there really is a lot to like. 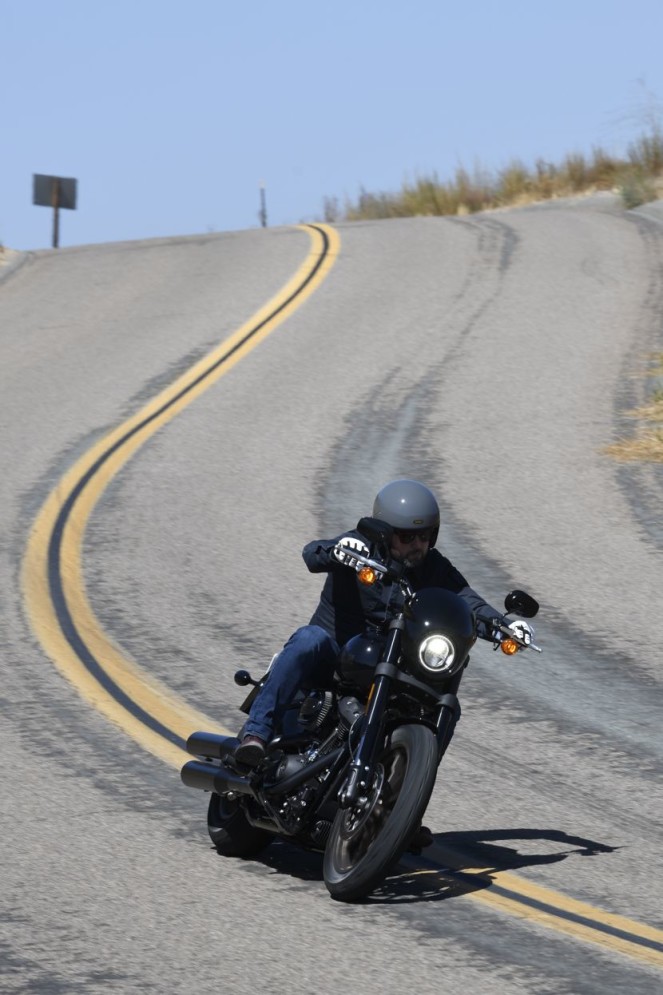 The 2020 Harley Davidson Lowrider S starts at £15,285 if you want it in black, rising to £16,175 for the silver version. There’s a stack of accessories available but the only thing you’ll get for free is the smile.