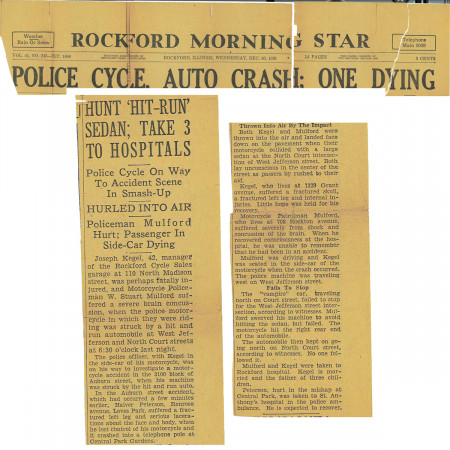 Today we share 1 of many terrible accidents the Kegel family has gotten into over the years that have been published in local newspapers. Keep in mind while reading, Joe didn't pass until 1947 ?From the Dec 30, 1931 Rockford Morning StarPOLICE CYCLE, AUTO CRASH; ONE DYINGHunt 'Hit-Run' Sedan; Take 3 to HospitalsPolice Cycle On Way to Accident Scene in Smash-UpHurled into AirPoliceman  Mulford Hurt; Passenger in Side-Car DyingJoseph Kegel, 42, manager of the Rockford Cycle Sales garage at 110 North Madison street was perhaps fatally injured, and Motorcycle Policeman W. Stuart Mulford suffered a severe brain concussion, when the police motorcycle in which they were riding was struck by a hit and run automobile at West Jefferson and North Court streets at 6:30 o'clock last night.The police officer, with Kegel in the side-car of his motorcycle, was on his way to investigate a motorcycle accident in the 3100 block of Auburn street, when his machine was struck by the hit and run auto.In the Auburn street accident, which had occurred a few minutes earlier, Halver Peterson, Renrose avenue, Loves Park, suffered a fractured left leg and serious lacerations about the face and body, when he lost control of his motorcycle and it crashed into a telephone pole at Central Park Gardens.Thrown Into Air by the ImpactBoth Kegel and Mulford were thrown into the air and landed face down on the pavement when their motorcycle collided with a large sedan at the North Court intersection of West Jefferson street. Both lay unconscious in the center of the street as passers by rushed to their aid.Kegel, who lives at 1329 Grant avenue, suffered a fractured skull, a fractured left leg and internal injuries. Little hope was held for his recovery.Motorcycle Patrolman Mulford, who lives at 708 Rockton avenue, suffered severely from shock and concussion of the brain. When he recovered consciousness at the hospital, he was unable to remember that he had been in an accident.Mulford was driving and Kegel was seated in the side-car of the motorcycle when the crash occurred. The police machine was traveling west on West Jefferson street.Fails to StopThe "vampire" car, traveling north on Court street, failed to stop for the West Jefferson street intersection, according to witnesses. Mulford swerved his machine to avoid hitting the sedan, but failed. The motorcycle hit the right rear end of the automobile.The automobile then kept on going north on North Court street, according to witnesses. No one followed it.Mulford and Kegel were taken to Rockford hospital. Kegel is married and the father of three children.Peterson, hurt in the mishap at Central Park, was taken to St. Anthony's hospital in the police ambulance. He is expected to recover.#kegel365 #harleydavidson #kegelhd #worldsoldest #365daysofkegelHD