Kegel Harley-Davidson® provides superior customer service and has an entire team that consists of professional sales members, finance experts, service technicians and a knowledgeable parts and accessories staff to support you, our valued customer. We pride ourselves on having well-trained experts that strive for customer satisfaction. Come in and visit our friendly, reliable and experienced staff.

We will help you maintain your motorcycle so that it runs for years. If it is having problems, we can diagnose and repair it! Schedule your service appointment today. 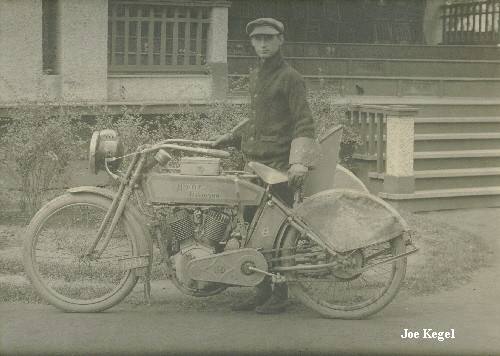 In 1895 when our grandfather was 5 years old, his father died. He had to quit school and go to work shortly after. He became a mechanics apprentice for a man named Joe Redlinger. Mr. Redlinger owned a bicycle store. It was located in Freeport, Illinois. Back at the turn of the century there were very few mass produced bicycles. People who wanted bicycles back then went to a store and the store clerks or owner would measure you up for a bicycle. The store would build the frame and fit the wheels and seats depending on your size, much like a tailor would fit you for a suit.

In 1909 Mr. Redlinger wanted to retire and for our grandfather to take over the business. So they worked out a deal that would allow Joe Kegel to buy on contract. And shortly after Harley-Davidson® came around and asked Joe if he would like to be a dealer for Harley-Davidson®. So Grandpa Joe took on Harley-Davidson® motorcycles. 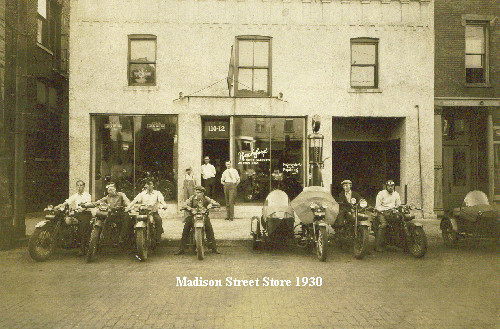 In 1923 the Harley-Davidson® dealer Mr. Johnston in Rockford, Illinois decided that it was time for him to sell out. The Harley-Davidson® regional sales manager at the time asked Joe if he would be interested in moving to Rockford and buy out Mr. Johnston. So in 1923 Joe moved his family to Rockford, and bought out the dealer located at 118 N. Madison St. A year or so later 110 N. Madison store became available. Joe moved and the Kegel's stayed in that store till 1975.

In 1930 just as the depression was getting started Joe went out on an accident call with a policeman named Stu Mulford. While on the way a car went through a stop sign and hit their sidecar and grandpa Joe was seriously hurt. He spent 6 months in the hospital and another 6 months at home recuperating. When he was finally able to return to work he found out that he owed $10,000.00 more than his inventory was worth. He lost any money he had in the bank when it failed, so he wrote to all of his creditors and told them that he would pay them all off. He would send them money every week even if it was only sometimes a dollar. Even though he lost his home because of not working he kept going and bought back the house and paid off all of his creditors. That had a lasting effect because later on after he died his two sons were still able to buy on credit even after Joe died. 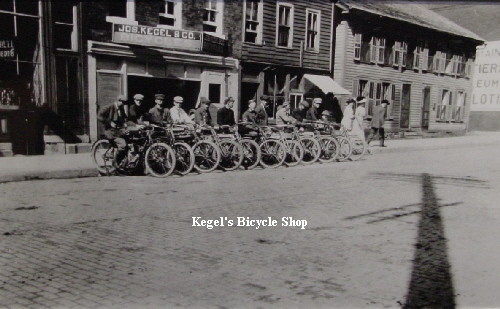 But before that in 1946 Joe's two sons Harold and Robert bought in as equal partners. Then in April of 1947 Joe died of a heart attack. Their mother Margaret inherited Joe's shares and remained as equal partners till her death in 1956. It wasn't too long after that that the motorcycle business slowed down. And the two brothers had a rough time, borrowed money to keep the businesses going and darn near lost them. But they both worked hard much like their father before them and slowly clawed their way out of debt.

In 1953 they decided that because Harold liked the bicycle business and Robert liked the motorcycles better that they should split the businesses apart. They still got along fine but each went their separate ways. In 1954 Rockford Cycle Sales became Kegel Motorcycle Co. Robert worked hard and weathered the tough times, with motorcycles falling out of favor with the general public, it was difficult times till the late 1950's when the business slowly started to pick up again. 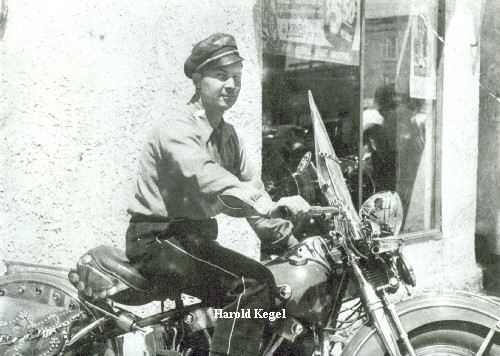 By the early 1960's Robert needed help in the store so Robert's oldest daughter came to work for him. Robert had 6 children and they were always around to try and help out, but were more in the way than any real help. We as boys always wanted to go down to the shop and help out, and it was a fun time for us and filled with a lot of memories.

By the mid-sixties us boys started to work at the store part-time and in the summers. But when we turned 14 years of age our father turned us boys over to work at our uncle Harold's bicycle store and he taught us how to use wrenches and work with tools. Then we worked at both stores off and on, depending on who needed us more. It was handy that they were located less than a block apart. As the sixties wore on our father's 4 boys all worked for him at some time. As we learned more and more us boys along with our sister who already worked full time were able to help out as the business was expanding. 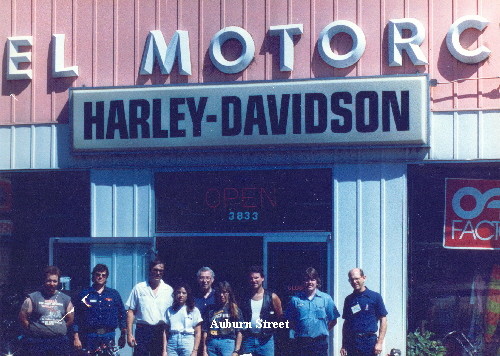 In 1974 Karl became a partner in the business and later on the rest of the boys and sister Carole became owners. In 1975 we moved finally from the old Madison St. store to 3833 Auburn St.

As the business grew, our needs as adults also grew. The oldest son Paul decided that his interests would be better served if he went out on his own in 1986. By 1995 we could no longer do business in our Auburn Street store so we moved to our present location in 1996. In 1998 we won the Dealernews Top 100 contest for the best store in the country!

At that time we decided to see who was the oldest dealer in the nation. For years the Dudley Perkins family had claimed that they were the oldest, but we were pretty sure it was us. Unfortunately records for that era were not kept very well by the factory or by us. It was always understood by our family that we took on Harley-Davidson® motorcycles in 1910, but the only proof is circumstantial. We have a July, 1947 copy of the "Enthusiast" that states that they regret to inform everyone that Joe Kegel died in April, 1947 and that he had started selling Harley-Davidson® motorcycles in 1910. And in 1923 Joe sold his business to his brother Julius and moved to Rockford. 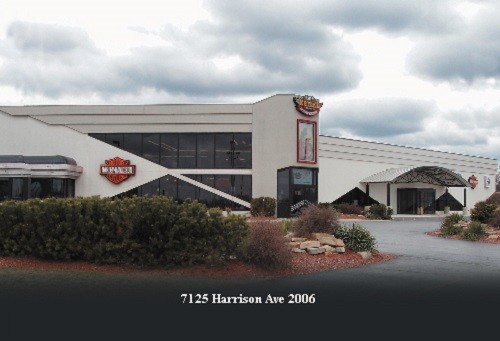 But Harley® couldn't find any proof in recent years of that and have stated that Joe Kegel was a dealer for certain in March, 1912. And so for right now Harley-Davidson® is comfortable with that. That still makes us the oldest Harley-Davidson® dealership still in the same family.

Since then Carole has retired in 1996, and Robert died in September 2001. Karl retired November 2017.  Paul has sold out of his dealership located in Milwaukee. Mark Kegel and Katrina Kegel-Mather still run the dealership today.