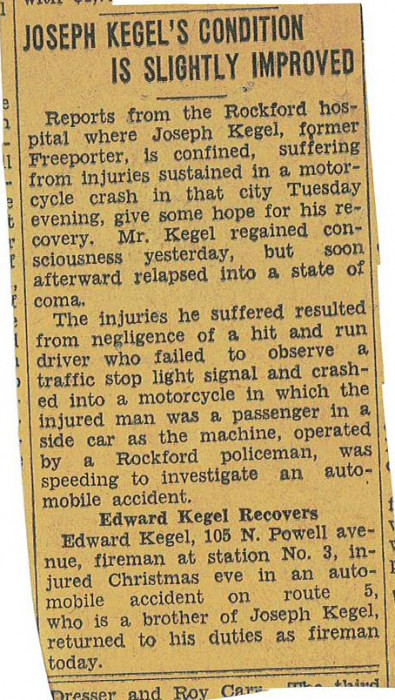 Finishing up from the last few days, you can see that the end of 1931 was a bit rough for the Kegel family, however both brothers pulled through!JOSEPH KEGEL'S CONDITION IS SLIGHTLY IMPROVEDReports from the Rockford hospital where Joseph Kegel, former Freeporter, is confined, suffering from injuries sustained in a motorcycle crash in that city Tuesday evening, give some hope for his recovery, Mr. Kegel regained consciousness yesterday, but soon afterward relapsed into a state of coma.The injuries he suffered resulted from negligence of a hit and run driver who failed to observe a traffic stop light signal and crashed into a motorcycle in which the injured man was a passenger in a side car as the machine operated by a Rockford policeman, was speeding to investigate an automobile accident.Edward Kegel RecoversEdward Kegel, 105 N. Powell avenue, fireman at station No. 3, injured Christmas eve in an automobile accident on route 5, who is a brother of Joseph Kegel, returned to his duties as fireman today.#kegel365 #harleydavidson #kegelhd #worldsoldest