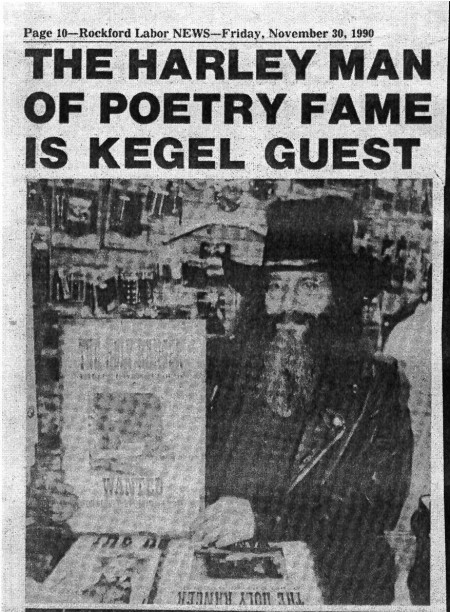 As shared in the November 30, 1990 Rockford Labor News, Dr. Martin "Marty" Jack Rosenblum (aka "The Holy Ranger") made a signing appearance at our Auburn street location.Marty was born in Appleton, Wisconsin to Swedish immigrants. In 1989 he took the role of The Holy Ranger, a cowboy type poet for the Harley-Davidson crowd. In 1989 he also published a book "The Holy Ranger: Harley-Davidson Poems" and an album "I Am the Holy Ranger" and in 1990 he produced the album "The Holy Ranger's Free Hand". The Holy Ranger character attracted a cult following among riders.Marty was a diehard Harley enthusiast and while working for Harley-Davidson, he was responsible for organizing the archives, motorcycles, and materials that went back to the beginning of the Motor Company. His efforts played a major role in the creation of the current Harley-Davidson Museum, causing him to become the official historian for the Motor Co. in the 90s.Sadly he passed away in 2014 at the age of 67.Were any of you at this signing or a fan of his back in the day?#kegel365 #harleydavidson #kegelhd #worldsoldest #365daysofKegelHD