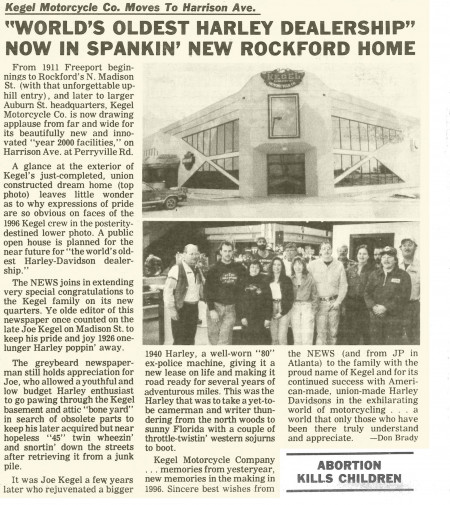 Today we share a thoughtful, reminiscent piece from the Feb 23, 1996 Rockford Labor News that Don Brady wrote.Kegel Motorcycle Co. Moves to Harrison Ave."WORLD'S OLDEST HARLEY DEALERSHIP" NOW IN SPANKIN' NEW ROCKFORD HOMEFrom 1911 Freeport beginnings to Rockford's N. Madison St. (with that unforgettable uphill entry), and later to larger Auburn St. headquarters, Kegel Motorcycle Co. is now drawing applause from far and wide for its beautifully new and innovated "year 2000 facilities," on Harrison Ave. at Perryville Rd.A glace at the exterior of Kegel's just-completed, union constructed dream home (top photo) leave little wonder as to why expressions of pride are so obvious on faces of the 1996 Kegel crew in the posterity-destined lower photo. A public open house is planned for the near future for "the world's oldest Harley-Davidson dealership."The NEWS joins in extending very special congratulations to the Kegel family on its new quarters. Ye olde editor of this newspaper once counted on the late Joe Kegel on Madison St. to keep his pride and joy 1926 one-lunger Harley poppin' away.The greybeard newspaperman still holds appreciation for Joe, who allowed a youthful and low budget Harley enthusiast to go pawing through the Kegel basement and attic "bone yard" in search of obsolete parts to keep his later acquired but near hopeless "45" twin wheezin' and snortin' down the streets after retrieving it from a junk pile.It was Joe Kegel a few years later who rejuvenated a bigger 1940 Harley, a well-worn "80" ex-police machine, giving it a new lease on life and making it road ready for several years of adventurous miles. This was the Harley that was to take a yet-to-be cameraman and writer thundering from the north woods to sunny Florida with a couple of throttle-twistin' western sojurns to boot.Kegel Motorcycle Company... memories from yesteryear, new memories in the making in 1996. Sincere best wishes from the NEWS (and from JP in Atlanta) to the family with the proud name of Kegel and for its continued success with American-made, union-made Harley Davidsons in the exhilarating world of motorcycling ... a world that only those who have been there truly understand and appreciate.#kegel365 #harleydavidson #kegelhd #worldsoldest #365daysofKegelHD