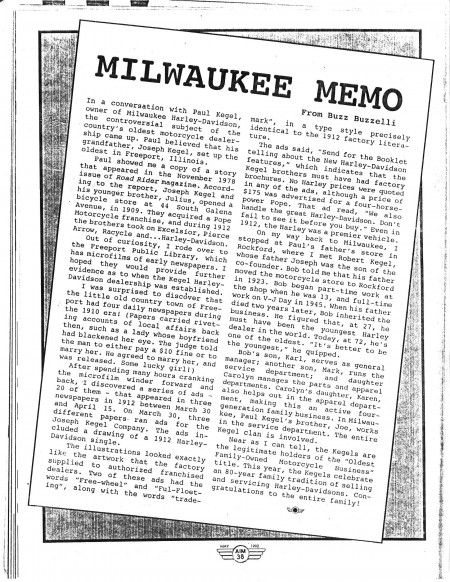 "In a conversation with Paul Kegel, owner of Milwaukee Harley-Davidson, the controversial subject of the country's oldest motorcycle dealership came up. Paul believed that his grandfather, Joseph Kegel, set up the oldest in Freeport, Illinois.Paul showed me a copy of a story that appeared in the November 1978 issue of Road Rider magazine. According to the report, Joseph Kegel and his younger brother, Julius, opened a bicycle store at 44 South Galena Avenue, in 1909. They acquired a Pope Motorcycle franchise, and during 1912 the brother took on Excelsior, Pierce Arrow, Racycle and... Harley-Davidson.Out of curiosity, I rode over to the Freeport Public Library, which has microfilms of early newspapers. I hoped they would provide further evidence as to when the Kegel Harley-Davidson dealership was established.I was surprised to discover that the little old country town of Freeport had four daily newspapers during the 1910 era! (Papers carried riveting accounts of local affairs back then, such as a lady whose boyfriend had blackened her eye. The judge told the man to either pay a $10 fine or to marry her. He agreed to marry her, and was released. Some lucky girl!)After spending many hours cranking the microfilm winder forward and back, I discovered a series of ads - 20 of them - that appeared in three newspapers in 1912 between March 30 and April 15. On March 30, three different papers ran ads for the Joseph Kegel Company. The ads included a drawing of a 1912 Harley-Davidson single.The illustrations looked exactly like the artwork that the factory supplied to authorized franchised dealers. Two of these ads had the words "Free-wheel" and "Ful-Floet-ing", along with the words "trademark", in a type style precisely identical to the 1912 factory literature.The ads said, "Send for the Booklet telling about the New Harley-Davidson features," which indicates that the Kegel brothers must have had factory brochures. No Harley prices were quoted in any of the ads, although a price of $175 was advertised for a four-horsepower Pope. That ad read, "We also handle the great Harley-Davidson. Don't fail to see it before you buy." Even in 1912, the Harley was a premier vehicle.On my way back to Milwaukee, I stopped at Paul's father's store in Rockford, where I met Robert Kegel, whose father Joseph was the son of the co-founder. Bob told me that his father moved the motorcycle store to Rockford 1923. Bob began part-time work at the shop when he was 13, and full-time work on V-J Day in 1945. When his father died two years later, Bob inherited the business. He figured that, at 27, he must have been the youngest Harley dealer in the world. Today, at 72, he's one of the oldest. "It's better to be the youngest, " he quipped.Bob's son, Karl, serves as general manager; another son, Mark, runs the service department; and daughter Carolyn manages the parts and apparel departments. Carolyn's daughter, Karen, also helps out in the apparel department, making this an active four-generation family business. In Milwaukee, Paul Kegel's brother, Joe, works in the service department. The entire Kegel clan is involved.Near as I can tell, the Kegels are the legitimate holders of the "Oldest Family-Owned Motorcycle Business" title. This year, the Kegels celebrate an 80-year family tradition of selling an servicing Harley-Davidsons. Congratulations to the entire family!#kegel365 #harleydavidson #kegelhd #worldsoldest