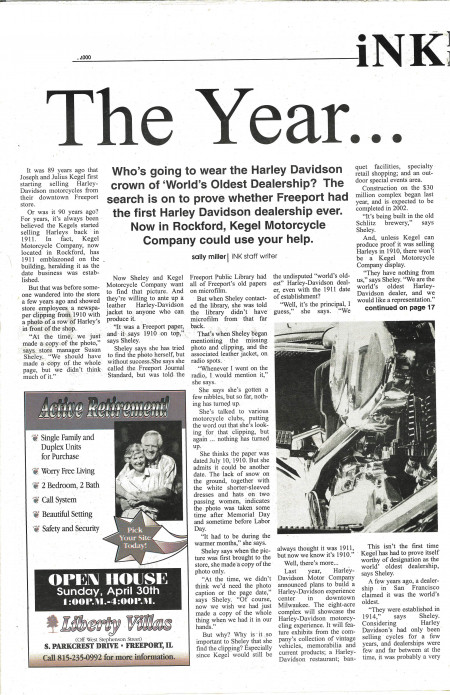 Today for #365daysofkegelHD we're beginning a short series, sharing an article from the April 27, 2000 issue of Freeport iNK newspaper, where like a previous post we shared, they did some digging on their own to see what date the Kegel family started selling H-D.As it is an ongoing debate that we still continue to challenge to this day, if you happen across anything that says both "Kegel" and "Harley-Davidson" prior to 1912 please share it with us!"It was 89 years ago that Joseph and Julius Kegel first started selling Harley-Davidson motorcycles from their downtown Freeport store.Or was it 90 years ago? For years, it's always been believed the Kegels started selling Harleys back in the 1911. In fact, Kegel Motorcycle Company, now located in Rockford, has 1911 emblazoned on the building, heralding it as the date business was established.But that was before someone wandered into the store a few years ago and showed store employees a newspaper clipping from 1910 with a photo of a row of Harley's in front of the shop."At the time, we just made a copy of the photo," says store manager Susan Sheley. "We should have made a copy of the whole page, but we didn't think much of it."Now Sheley and Kegel Motorcycle Company want to find that picture. And they're willing to ante up a leather Harley-Davidson jacket to anyone who can produce it."It was a Freeport paper, and it says 1910 on top," says Sheley.Sheley says she has tried to find the photo herself, but without success. She says she called the Freeport Journal Standard, but was told the Freeport Public Library had all of Freeport's old papers on microfilm.But when Sheley contacted the library, she was told the library didn't have microfilm from that far back.That's when Sheley began mentioning the missing photo and clipping, and the associated leather jacket, on radio spots."Whenever I went on the radio, I would mention it," she says.She says she's gotten a few nibbles, but so far, nothing has turned up.She's talked to various motorcycle clubs, putting the word out that she's looking for that clipping, but again ... nothing has turned up.She thinks the paper was dated July 10, 1910. But she admits it could be another date. The lack of snow on the ground, together with the white shorter-sleeved dresses and hats on two passing women, indicates the photo was taken sometime after Memorial Day and sometime before Labor Day."It had to be during the warmer months," she says.Sheley says when the picture was first brought to the store, she made a copy of the photo only."At the time, we didn't think we'd need the photo caption or the page date," says Sheley. "Of course, now we wish we had just made a copy of the whole thing when we had it in our hands."But why? Why is it so important to Sheley that she find the clipping? Especially since Kegel would still be the undisputed "world's oldest" Harley-Davidson dealer, even with the 1911 date of establishment?"Well, it's the principal, I guess," she says. "We always thought it was 1911, but now we know it's 1910."Well, there's more...Last year, Harley-Davidson Motor Company announced plans to build a Harley-Davidson experience center in downtown Milwaukee. The eight-acre complex will showcase the Harley-Davidson motorcycling experience. It will feature exhibits from the company's collection of vintage vehicles, memorabilia and current products; a Harley-Davidson restaurant; banquet facilities, specialty retail shopping; and an outdoor special events area.Construction on the $30 million complex began last year, and is expected to be completed in 2002.It's being built in the old Schlitz brewery," says Sheley.And, unless Kegel can produce proof it was selling Harleys in 1910, there won't be a Kegel Motorcycle Company display."They have nothing from us," says Sheley. "We are the world's oldest Harley-Davidson dealer, and we would like a representation."This isn't the first time Kegel has had to prove itself worthy of designation as the world' oldest dealership, says Sheley.A few years ago, a dealership in San Francisco claimed it was the world's oldest."They were esstablished in 1914," says Sheley. Considering Harley Davidson's had only been selling cycles for a few years, and dealership were few and far between at the time, it was probably a very harmless mistake. Probably.#kegel365 #harleydavidson #kegelhd #worldsoldest