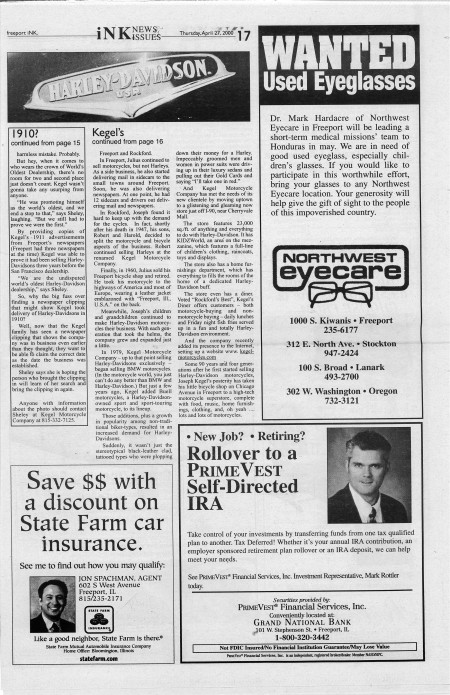 "In Freeport, Julius continued to sell motorcycles, but not Harleys. As a side business, he also started delivering mail in sidecars to the small towns around Freeport. Soon, he was also delivering newspapers. At one point, he had 12 sidecars and drivers out delivering mail and newspapers.In Rockford, Joseph found it hard to keep up with the demand for the cycles. In fact, shortly after his death in 1947, his sons, Robert and Harold, decided to split the motorcycle and bicycle aspects of the business. Robert continued selling Harleys at the renamed Kegel Motorcycle Company.Finally, in 1960, Julius sold his Freeport bicycle shop and retired. He took his motorcycle to the highways of America and most of Europe, wearing a leather jacket emblazoned with "Freeport, Ill., U.S.A." on the back.Meanwhile, Joseph's children and grandchildren continued to make Harley-Davidson motorcycles their business. With each generation that took the helms, the company grew and expanded just a little.In 1979, Kegel Motorcycle Company - up to that point selling Harley-Davidsons exclusively - began selling BMW motorcycles.(In the motorcycle world, you just can't do better than BMW and Harley-Davidson.) But just a few years ago, Kegel added Buell motorcycles, a Harley-Davidson-owned sport and sport-touring motorcycle, to its lineup.Those additions, plus a growth in popularity among non-traditional biker-types, resulted in an increased demand for Harley-Davidsons.Suddenly, it wasn't just the stereotypical black-leather clad, tattooed types who were plopping down their money for a Harley. Impeccably groomed men and women in power suits were driving up in their luxury sedans and pulling out their Gold Cards and saying "I'll take one in red."And Kegel Motorcycle Company has met the needs of its new clientele by moving uptown to a glistening and gleaming now store just off I-90, near Cherryvale Mall.The store features 23,000 sq./ft. of anything and everything to do with Harley-Davidson. It has KIDZWorld, an area on the mezzanine, which features a full-line of children's clothing, raincoats, toys and displays.The store also has a home furnishing department, which has everything to fills the room of the home of a dedicated Harley-Davidson buff.The store even has a diner. Voted "Rockford's Best", Kegel's Diner offers customers - both motorcycle-buying and non-motorcycle buying - daily lunches and Friday night fish fries served up in a fun and totally Harley-Davidson environment.And the company recently added its presence to the Internet, setting up a website www.kegelmotorcycles.comSome 90 years and four generation after he first started selling Harley-Davidson motorcycles, Joseph Kegel's posterity has taken his little bicycle hop on Chicago Avenue in Freeport to a high-tech motorcycle superstore, complete with food, music, home furnishings, clothing, and, oh yeah ... lots and lots of motorcycles.*original typos left in transcription, as can be see in the original scanned article. #kegel365 #harleydavidson #kegelhd #worldsoldest