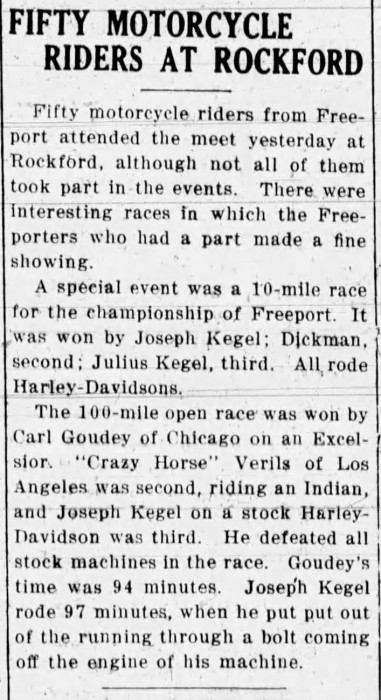 FIFTY MOTORCYCLE RIDERS AT ROCKFORDFifty motorcycle riders from Freeport attended the meet yesterday at Rockford, although not all of them took part in the events. there were interesting races in which the Freeporters who had a part made a fine showing.A special event was a 10-mile race for the championship of Freeport. It was won by Joseph Kegel; Dickman, second; Julius Kegel, third. All rode Harley-Davidsons.The 100-mile open race was won by Carl Goudey of Chicago on a Excelsior. "Crazy Horse" Verils of Los Angeles was second, riding an Indian, and Joseph Kegel on a stock Harley-Davidson was third. He defeated all stock machines in the race. Goudey's time was 94 minutes. Joseph Kegel rode 97 minutes, when he put put out of the running through a bolt coming off the engine of his machine.#365daysofkegelhd #harleydavidson #kegelhd #worldsoldest