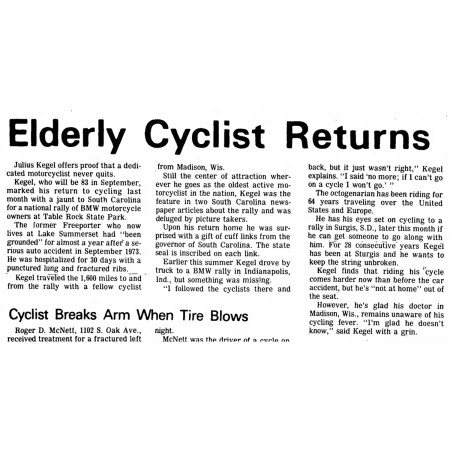 If you think you're getting too old to ride, just remember Julius Kegel was taking long jaunts on his bike well into his 80s!From the Aug 5, 1974 Freeport Journal-Standard:"Elder Cyclist ReturnsJulius Kegel offers proof that a dedicated motorcyclist never quits.Kegel, who will be 83 in September, marked his return to cycling last month with a jaunt to South Carolina for a national rally of BMW motorcycle owners at Table Rock State Park.The former Freeporter who now lives at Lake Summerset had "been grounded" for almost a year after a serious auto accident in September 1973. He was hospitalized for 30 days with a punctured lung and fractured ribs.Kegel traveled the 1,600 miles to and from the rally with a fellow cyclist from Madison, Wis.Still the center of attraction wherever he goes as the oldest active motorcyclist in the nation, Kegel was the feature in two South Carolina newspaper articles about the rally and was deluged by picture takers.Upon his return home he was surprised with a gift of cuff links from the governor of South Carolina. The state seal is inscribed on each link.Earlier this summer Kegel drove by truck to a BMW rally in Indianapolis, Ind., but something was missing."I followed the cyclists there and back, but it just wasn't right," Kegel explains. "I said 'no more; if I can't go on a cycle I won't go.'"The octogenarian has been riding for 64 years traveling over the United States and Europe.He has his eyes set on cycling to a rally in Surgis, S.D., later this month if he can get someone to go along with him. For 28 consecutive years Kegel has been at Sturgis and he wants to keep the string unbroken.Kegel finds that riding his cycle comes harder now than before the car accident, but he's "not at home" out of the seat.However, he's glad his doctor in Madison, Wis., remains unaware of his cycling fever. "I'm glad he doesn't know," said Kegel with a grin.#kegel365 #harleydavidson #kegelhd #worldsoldest #365daysofkegelHD