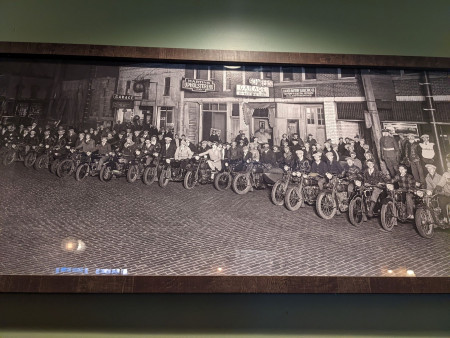 Today's #365daysofkegelhd can actually been seen at local dining spot The Olympic Tavern as it is currently hanging up in the restaurant and was brought to our attention by Zak there.So what we know of this photo is that it was taken on the block outside our first location in Rockford (118 N. Madison), placing it in the mid-1920s as we moved there from Freeport in 1923 and were only in that location for a few years before moving up a few spaces to 110 N. Madison.A couple fun things we've noticed in this photo:1) The guy in an Indian sweater standing behind all the Harleys. That is because when we were at this particular location there was an Indian Motorcycle shop located right next door!2) As Zak pointed out to us, if you look closely in the middle of the photo you will see a woman on a motorcycle. Well... truth be told, that isn't actually a woman - it's local photographer Corbin Tyson's uncle! Apparently his Uncle Jack was part of one of the local motorcycle clubs that did monthly rides and for every ride he would dress in drag! Quite daring, given the time period of this photo!Do you notice anything else of interest in this photo? Do you have any photos related to our 110+ year history that you'd like to share/submit to us?Let us know either here or via message!#kegel365 #harleydavidson #kegelhd #worldsoldest