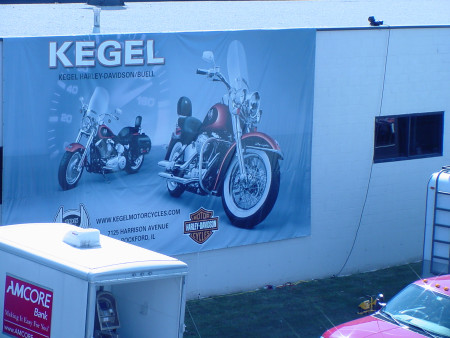 From the RR Star Archives on Aug 27, 2008 by Betsy Lopez Fritscher: http://mvnt.us/m1311001Gathering at Kegel Harley-Davidson celebrates freedom of the open roadFranklin Grove resident Eric Poe has been riding for as long as he can remember. Whether it is a motorcycle or a dirt bike, he’s found riding is his ticket to the open road, wind and most importantly, his freedom.Poe, 35, and his brother Adam, 31, were just two of thousands of motorcyclists riding through Rockford through Thursday in route to the 105th anniversary of Harley-Davidson in Milwaukee. The brothers attended Kegel Harley-Davidson/Buell's Almost Home Celebration this afternoon.“I had dirt bikes and four wheelers forever,” Poe said, noting that in 2004, he purchased his first Harley, a rare SoftTail FXSTSI.“My dad’s got four bikes, my mom rides and my brother and sister ride, too,” he said. “For me, this is freedom of the open road.”The Almost Home Celebration embraced the passion of thousands, motorcycles and the adventures they bring to every day people.Mel Kegel of Kegel Harley-Davidson started riding 36 years ago. For her, riding brought her a great deal of pleasure.“I was just a baby,” she said, admitting it was then that she met her husband and entered into the Kegel family motorcycle business. Since, she’s seen people from all walks of life and all parts of the country stop in her shop.“I just saw some people from the Netherlands leaving out of here,” she said. “It’s international. People from all over the world really, coming through here on their way to Milwaukee for the 105th anniversary.”Her brother-in-law, Mark Kegel, said he sees this experience of hosting a Harley festival as a way for the community to share in the fun of the anniversary of the bikes people make a part of their daily lives.“We want the community to be behind us during events like this one,” he said. “We’re getting a locally owned business a chance for people across the region to hear about our town and our business.”Organizers estimate up to 50,000 people may stop to attend the festival or participate in the police escorted ride up to Milwaukee on Thursday.Many bikers, like Poe, admit that riding motorcycles is a way of life, often spanning generations.Ladies of Harley Rock River Chapter Officer Mona Olsen said celebrations leading up to the 105th event are about savoring the moment with friends and family.“We’re really excited to be doing this,” she said. “This will be our first time experiencing Milwaukee. It’s great to see all the local clubs out here pulling together.”#kegel365 #harleydavidson #kegelhd #worldsoldest #365daysofkegelhd