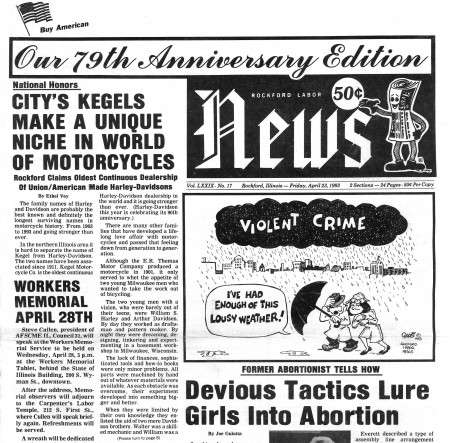 National Honors:CITY'S KEGELS MAKE A UNIQUE NICHE IN WORLD OF MOTORCYCLESRockford Claims Oldest Continuous Dealership Of Union/American Made Harley-DavidsonsBy Ethol VoyThe family names of Harley and Davidson are probably the best known and definitely the longest surviving names in motorcycle history. From 1903 to 1993 and going stronger than ever.In the northern Illinois area it is hard to separate the name of Kegel from Harley-Davidson. The two names have been associated since 1911. Kegel Motorcycle Co. is the oldest continuous Harley-Davidson dealership in the world and it is going stronger than ever. (Harley-Davidson this year is celebrating its 90th anniversary.)There are many other families that have developed a life-long love affair with motorcycles and passed that feeling down from generation to generation.Although the E.R. Thomas Motor Company produced a motorcycle in 1901, it only served to whet the appetite of two young Milwaukee men who wanted to take the work of out of bicycling.The two young men with a vision, who were barely out of their teens, were William S. Harley and Arthur Davidson. By day they worked as draftsman and pattern maker. By night they were dreaming, designing, tinkering and experimenting in a basement workshop in Milwaukee, Wisconsin.The lack of finances, sophisticated tools and how-to books were only minor problems. All parts were machined by hand out of whatever materials were available. As each obstacle was overcome, their experiment developed into something bigger and better.When they were limited by their own knowledge they enlisted the aid of tow more Davidson brothers. Walter was a skilled mechanic and William was a tool maker.Stay tuned for more!#365daysofkegelhd #harleydavidson #kegelhd #worldsoldest