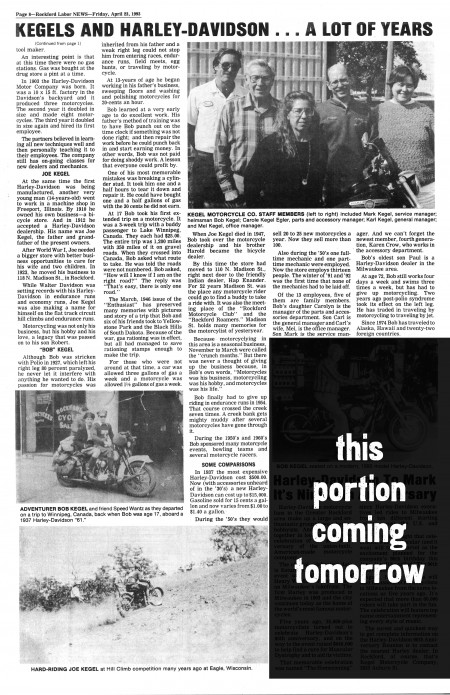 Continued from yesterday...KEGELS AND HARLEY-DAVIDSON ... A LOT OF YEARSAn interesting point is that at this time were no gas stations. Gas was bought at the drug store a pint at a time.In 1903 the Harley-Davidson Motor Company was born. It was a 10x15 ft. factory in the Davidson's backyard and it produced three motorcycles. The second year it doubled in size and made eight motorcycles. The third year it doubled in size again and hired its first employee.The partners believed in learning all new techniques well and then personally teaching it to their employees. The company still has on-going classes for new dealers and mechanics.JOE KEGELAt the same time the first Harley-Davidson was being manufactured, another very young man (14-years-old) went to work in a machine shop in Freeport, Illinois. By 1910 he owned his own business - a bicycle store. And in 1912 he accepted a Harley-Davidson dealership. His name was Joe Kegel, the father and grandfather of the present owners.After World War I, Joe needed a bigger store with better business opportunities to care for his wife and two children. In 1923, he moved his business to 118 N. Madison St., in Rockford.While Walter Davidson was setting records with his Harley-Davidson in endurance runs and economy runs, Joe Kegel was also making a name for himself on the flat track circuit hill climbs and endurance runs.Motorcycling was not only his business, but his hobby and his love, a legacy that was passed on to his son Robert."BOB" KEGELAlthough Bob was stricken was Polio in 1927, which left his right leg 80 percent paralyzed, he never let it interfere with anything he wanted to do. His passion for motorcycles was inherited from his father and a weak right leg could not stop him from entering races, endurance runs, field meets, egg hunts, or traveling by motorcycle.At 13-years of age he began working in his father's business, sweeping floors and washing and polishing motorcycles for 20-cents an hour.Bob learned at a very early age to do excellent work. His father's method of training was to have Bob punch out on the time clock if something was not done right; and then repair the work before he could punch back in and start earning money. In other words, Bob was not paid for doing shodddy work. A lesson that everyone could profit by.One of his most memorable mistakes was breaking a cylinder stud. It took him one and a half hours to tear it down and repair it. He could have bought one and a half gallons of gas with the 30 cents he did not earn.At 17 Bob took his first extended trip on a motorcycle. It was a 3-week trip with a buddy passenger to Lake Winnipeg, Canada. They each had $25.00. The entire trip was 1,200 miles with 350 miles of it on gravel roads. When they crossed into Canada, Bob asked what route to take. He was told the roads were not numbered. Bob asked, "How will I know if I am on the right road?" The reply was "That's easy, there is only one road."The March, 1946 issue of the "Enthusiast" has preserved many memories with pictures and story of a trip that Bob and six of his friends took to Yellowstone Park and the Black Hills of South Dakota. Because of the war, gas rationing was in effect, but all had managed to save rationing stamps enough to make the trip.For those who were not around at the time, a car was allowed three gallons of gas a week and a motorcycle was allowed 1 1/2 gallons of gas a week.When Joe Kegel died in 1947, Bob took over the motorcycle dealership and his brother Harold became the bicycle dealer.By this time the store had moved to 110 N. Madison St., right next door to the friendly Indian dealer, Hap Enander. For 52 years Madison St. was the place any motorcycle rider could go to find a buddy to take a ride with. It was also the meeting place of the "Rockford Motorcycle Club" and the "Rockford Roamers." Madison St. holds many memories for the motorcyclist of yesteryear.Because motorcycling in this area is a seasonal business, November to March were called the "crunch months." But there was never a though of giving up the business because in Bob's own words, "Motorcycles was his business, motorcycling as his hobby, and motorcycles was his life."Bob finally had to give up riding in endurance runs in 1954. That course crossed the creek seven times. A creek bank gets mighty muddy after several motorcycles have gone through it.During the 1950's and 1960's Bob sponsored many motorcycle events, bowling teams and several motorcycle racers.SOME COMPARISONSIn 1937 the most expensive Harley-Davidson cost $500.00. Now (with accessories unheard of in the '30's) a new Harley-Davidson can cost up to $15,000. Gasoline sold for 15 cents a gallon and now varies from $1.00 to $1.40 a gallon.During the '50's they would sell 20 to 25 new motorcycles a year. Now they sell more than 100.Also during the '50's one full-time mechanic and one part-time mechanic were employed. Now the store employs thirteen people. The winter of '91 and '92 was the first time that none of the mechanics had to be laid off.Of the 13 employees, five of them are family members. Bob's daughter Carolyn is the manager of the parts and accessories department. Son Carl is the general manager and Carl's wife, Mel, is the office manager. Son Mark is the service manager. And we can't forget the newest member, fourth generation, Karen Crow, who works in the accessory department.Bob's oldest son Paul is a Harley-Davidson dealer in the Milwaukee area.At age 72, Bob still works four days a week and swims three times a week, but has had to give up motorcycling. Two years ago post-polio syndrome took its effect on the left leg. He has traded in traveling by motorcycling to traveling by jet.Since 1974 Bob has traveled to Alaska, Hawaii and twenty-two foreign countries.#kegel365 #harleydavidson #kegelhd #worldsoldest #365daysofkegelhd