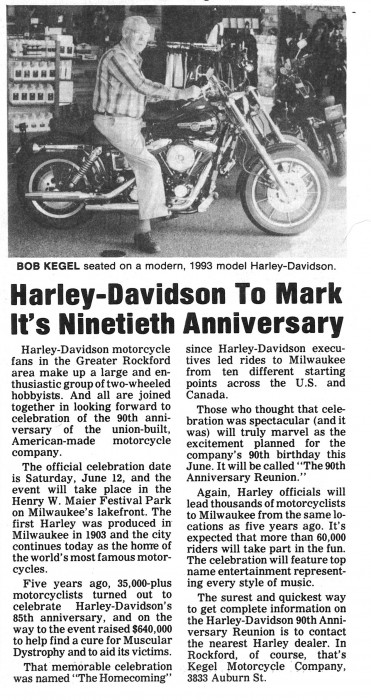 Harley-Davidson To Mark It's Ninetieth AnniversaryHarley-Davidson motorcycle fans in the Greater Rockford area make up a large and enthusiastic group of two-wheeled hobbyists. And all are joined together in looking forward to celebration of the 90th anniversary of the union-built, American-made motorcycle company.The official celebration date is Saturday, June 12, and the event will take place in the Henry W. Maier Festival Park on Milwaukee's lakefront. The first Harley was produced in Milwaukee in 1903 and the city continues today as the home of the world's most famous motorcycles.Five years ago, 35,000-plus motorcyclist turned out to celebrate Harley-Davidson's 85th anniversary, and on the way to the event raised $640,000 to help find a cure for Muscular Dystrophy and to aid its victims.That memorable celebration was named "The Homecoming" since Harley-Davidson executives led rides to Milwaukee from ten different starting points across the U.S. and Canada.Those who thought that celebration was spectacular (and it was) will truly marvel as the excitement planned for the company's 90th birthday this June. It will be called "The 90th Anniversary Reunion."Again, Harley officials will lead thousands of motorcyclists to Milwaukee from the same locations as five years ago. It's expected that more than 60,000 riders will take part in the fun. The celebration will feature top name entertainment representing every style of music.The surest and quickest way to get complete information on the Harley-Davidson 90th Anniversary Reunion is to contact the nearest Harley dealer. In Rockford, of course, that's Kegel Motorcycle Company, 3833 Auburn St.#kegel365 #harleydavidson #kegelhd #worldsoldest #365daysofkegelhd