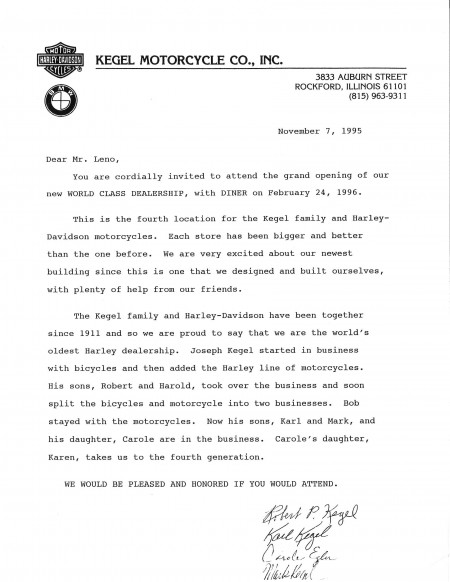 Prior to our Grand Opening at the Harrison location, we wrote a letter and extended an invitation to Mr. Jay Leno himself who was scheduled to make a nearby appearance around the same time of our opening in 1996.Sadly, Mr. Leno did not show. But hey, we tried!November 7, 1995Dear Mr. Leno,You are cordially invited to attend the grand opening of our new WORLD CLASS DEALERSHIP, with DINER on February 24, 1996.This is the fourth location for the Kegel family and Harley-Davidson motorcycles. Each store has been bigger and better than the one before. We are very excited about our newest building since this is one that we designed and built ourselves, with plenty of help from our friends.The Kegel family and Harley-Davidson have been together since 1911 and so we are proud to say that we are the world's oldest Harley dealership. Joseph Kegel started in business with bicycles and then added the Harley line of motorcycles. His sons, Robert and Harold, took over the business and soon split the bicycles and motorcycle into two businesses. Bob stayed with the motorcycles. Now his sons, Karl and Mark, and his daughter, Carole are in the business. Carole's daughter, Karen, takes us to the fourth generation.WE WOULD BE PLEASED AND HONORED IF YOU WOULD ATTEND.(Signed Robert P. Kegel, Karl Kegel, Carole Egler, Mark Kegel)#kegel365 #365daysofkegelhd #harleydavidson #kegelhd #worldsoldest #jayleno