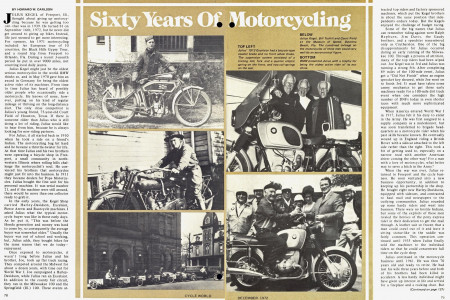 And now, for the beginning of the December 1972 Cycle World piece on Julius by Howard W. Carlson.Julius Kegel of Freeport, Ill., thought about giving up motorcycling because he was getting too old - that was in 1939. He turned 81 on September 16th, 1972, but he never did get around to giving up bikes. Instead, life just seemed to get more interesting. For openers, his 1971 motorcycling included: An European tour of 10 countries, the Black Hills Gypsy Tour, and a round trip from Freeport to Orlando, Fla. During a recent 3-month period he put in over 9000 miles, not counting local daily jaunts.Julius Kegel might just be the oldest serious motorcyclist in the world. BMW thinks so, and in May 1970 gave him an award in Germany for being the oldest active rider of its machines. From time to time Julius has heard of possibly older people who occasionally ride a motorcycle. He knows of none, however, putting on his kind of regular mileage or thriving on the long-distance diet. The only close competitor is Julius's young friend, 75-year-old Court Field of Houston, Texas. If there is someone older than Julius who is still doing a lot of riding, Julius would like to hear from him, because he is always looking for new riding partners.For Julius, it all started back in 1910 when he took a ride on a friend's Indian. The motorcycling bug bit hard and he became a throttle-twister for life. At that time Julius and his two brother were operating a bicycle shop in Freeport, a small community in northwestern Illinois where rolling hills challenge the motorcyclist's soul. He convinced his brother that motorcycles might just fit into the business. In 1911 they became dealers for Pope Motorcycles. Julius bought the first unit for his personal machine. It was serial number 21, and if the machine were still around, there would be more than one collector ready to grab it.In the early years, the Kegel Shop carried Harley-Davidson, Excelsior, Pierce Arrow and Racecycle machines. I asked Julius what the typical motorcycle buyer was like in those early days. As he put it, "This was before the Honda generation and money was hard to come by, so consequently the average buyer was somewhat older." Usually the buyer was out of school and working, but, Julius adds, they bought bikes for the same reason that we do today - enjoyment.Once exposed to motorcycles, it wasn't long before Julius and his brother, Joe, took up flat track racing. They competed around the Midwest for about a dozen years, with a time out of for World War I. Joe campaigned a Harley-Davidson, while Julius ran an Excelsior. In addition to the county fair circuit, they ran in the Milwaukee 100 and the Springfield (Ill.) 100. These events attracted top riders and factory sponsored machines, which put the Kegel brothers in about the same position that independents endure today. But the Kegels enjoyed the challenge of budget racing.Some of the big names that Julius can remember riding against were Ralph Hepburn, Jim Davis, the Gaudy brothers, and a speedster remembered only as Crutherston. One of the big disappointments for Julius occurred during an early running of the Milwaukee 100. Through a process of attrition, many of the top riders had been wiped out. Joe Kegel was in 3rd and Julius was running a strong 5th. After completing 89 miles of the 100-mile event, Julius got a "Did Not Finish" when an engine sprocket key sheared, while Joe went on to finish 3rd. It must have taken some canny mechanics to get those early machines ready for a 100-mile dirt track event when one considers the high number of DNFs today in even shorter races with much more sophisticated equipment.When America entered World War I in 1917, Julius felt it his duty to enlist in the Army. He was first assigned to a supply company as muleskinner, but was soon transferred to brigade headquarters as a motorcycle rider when his past skills became know. He eventually wouldup in England riding a British Rover with a sidecar attached to the left side rather than the right. This took a bit of getting used to, especially on a narrow road with another American driver coming the other way! For a man with a love of motorcycles, what better way to serve a hitch in the Army?When the war was over, Julius returned to Freeport and the cycle business. He soon ventured into a new business opportunity, in addition to keeping up his partnership in the shop. He bought eight new Harley-Davidsons, equipped with sidecars, and contracted to haul mail and newspapers to outlying communities. Julius rounded up some hardy riders and went into business. There were no hostile Indians, but some of the exploits of these men rivaled the heroics of the pony express rider in their dedication to get the mail through. a leather suit so frozen that a man could crawl out of it and leave it sitting statue-like in the saddle was fairly common. This operation continued until 1935 when Julius finally sold the machines to the individual riders to that he could concentrate full time on the cycle shop.#kegel365 #harleydavidson #kegelhd #worldsoldest #365daysofkegelhd #cycleworld