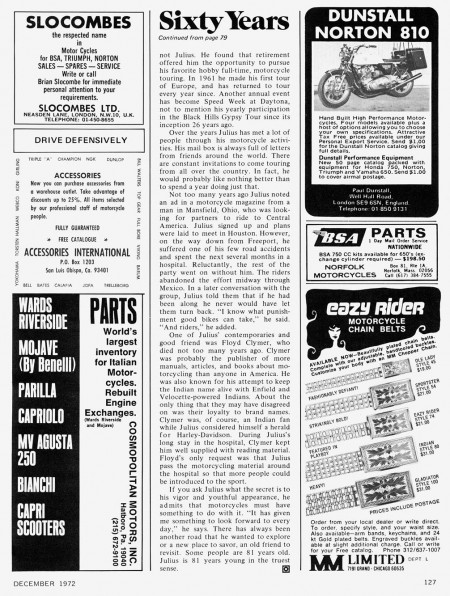 And now for the conclusion of the December 1972 Cycle World article on Julius Kegel...Julius continued in the motorcycle business until 1961. He was then 70 years old and ready to retire. He had lost his wife three years before and both of his brothers had been in killed in accidents. A less hardy individual might have given up interest in life and settled for a fireplace and a rocking chair. But not Julius. He found that retirement offered him the opportunity to pursue his favorite hobby full-time, motorcycle touring. In 1961 he made his first tour of Europe, and has returned to tour every year since. Another annual even has become Speed Week at Daytona, not to mention his yearly participation in the Black Hills Gypsy Tour since its inception 26 years ago.Over the years Julius has met a lot of people through his motorcycle activities. His mail box is always full of letters from friends around the world. There are constant invitations to come touring from all over the country. In fact, he would probably like nothing better than to spend a year doing just that.Not too many years ago Julius noted an ad in a motorcycle magazine from a man in Mansfield, Ohio, who was looking for partners to ride to Central America. Julius signed up and plans were laid to meet in Houston. However on the way down from Freeport, he suffered one of his few road accidents and spent the next several months in a hospital. Reluctantly, the rest of the party went on without him. The riders abandoned the effort midway through Mexico. In a lter conversation with the group, Julius told them that if he had been along he never would have let them turn back. "I know what punishment good bikes can take," he said. "And riders," he added.One of Julius' contemporaries and good friend was Floyd Clymer, who died not too many years ago. Clymer was probably the publisher of more manuals, articles, and books about motorcycling than anyone in America. He was also known for his attempt to keep the Indian name alive with Enfield and Velocette-powered Indians. About the only thing that they may have disagreed on was their loyalty to brand names. Clymer was, of course, an Indian fan while Julius considered himself a herald of Harley-Davidson. During Julius's long stay in the hospital, Clymer kept him well supplied with reading material. Floyd's only request was that Julius pass the motorcycling material around the hospital so that more people could be introduced to the sport.If you ask Julius what the secret is to his vigor and youthful appearance, he admits that motorcycles must have something to do with it. "It has given me something to look forward to every day," he says. There has always been another road that he wanted to explore or a new place to savor, an old friend to revisit. Some people are 81 years old. Julius is 81 years young in the truest sense.#kegel365 #harleydavidson #kegelhd #worldsoldest #365daysofkegelhd #cycleworld