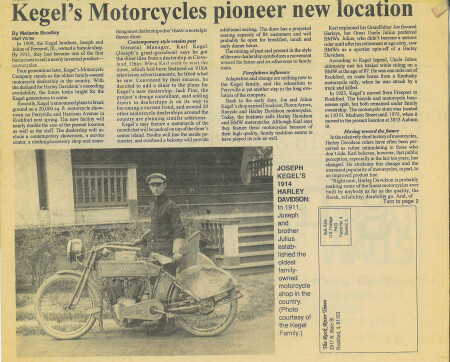 For today's #365daysofkegelhd we share the 1st page of an article clipping that appeared in The Rock River Times. Sadly we're not sure what happened to page 2, however it does go over some of the older history in the part we do have!

Kegel's Motorcycles pioneer new locationIn 1908, the Kegel brothers, Joseph and Julius of Freeport, Ill., owned a bicycle shop. By 1911, they had become one of the first businesses to sell a newly invented product - motorcycles.Four generations later, Kegel's Motorcycle Company stands as the oldest family-owned motorcycle dealership in the country. With the demand for Harley Davidson's exceeding availability, the future looks bright for the Kegel generations to come.Recently, Kegel's announced plans to break ground on a 20,000 sq. ft. motorcycle showroom on Perryville and Harrison Avenue in Rockford next spring. The new facility will nearly double the size of the present location as well as the staff. The dealership will include a contemporary showroom, a service center, a clothing/accessory shop and something most dealerships don't have: a nostalgic theme diner.Contemporary style retains pastGeneral Manager, Karl Kegel (Joseph's great-grandson) says he got the diner ideqa from a dealership in Cleveland, Ohio. When Karl went to visit the diner, which had been featured on VISA television advertisements, he liked what he saw. Convinced by their success, he decided to add a diner to the plans for Kegel's new dealership. Jack Pine, the project's design consultant, said adding diner to dealerships is on its way to becoming a current trend, and around 20 other motorcycle dealerships around the country are planning similar additions.Kegel's may feature a motorcycle of the month that will be parked on top of the diner's center island. Booths will line the inside perimeter, and overhead a balcony will provide additional seating. The diner has a projected seating capacity of 84 customers and will probably be open for breakfast, lunch and early dinner hours.The mixing of pats and present in the style of the new dealership symbolizes a movement toward the future and an adherence to family roots.Forefathers influenceAdaptation and change are nothing new to the Kegel family ,and the relocation to Perryville is yet another step in the long evolution of the company.Back in the early days, Joe and Julius Kegel's shop carried Excelsior, Pierce Arrow, Racycle and Harley Davidson motorcycles. Today, the business sells Harley Davidson and BMW motorcycles because of their high quality, family tradition seems to have played its role as well.Karl explained his Grandfather Joe favored Harleys, but Great Uncle Julius preferred BMWs. Julius, who didn't become a serious rider until after his retirement at age sixty, saw BMWs as a sportier spin-off of a Harley Davidson.According to Kege legend, Uncle Julius ultimately met his Maker while riding on a BMW at the age of 87. He was one mile out of Rockford, en route home from a Kentucky motorcycle rally, when he was struck by a truck and killed.1923, Kegel's moved from Freeport to Rockford. The bicycle and motorcycle businesses split, but both remained under family ownership. The motorcycle store was located at 110 N. Madison Street until 1975, when it moved to the present location at 3833 Auburn St.Moving toward the futureIn the relatively short history of motorcycles, Harley Davidson riders have often been perceived as rather intimidating to those who don't ride. Karl believes, however that public perception, especially in the last ten years, has changed. He attributes this change and the increased popularity of motorcycles, in part, to an improved product line."Right now, Harley Davidson is probably making some of the finest motorcycles ever built by anybody as far as the quality, the finish, reliability, durability go.#kegel365 #harleydavidson #kegelhd #worldsoldest