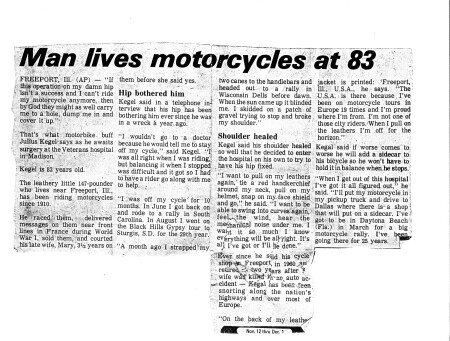 Last month we shared an article about Julius returning from a BMW rally in South Carolina at the age of 82. Today we share a continuation of Julius' travels at the age of 83, as published in the Rockford Register Star!Julius is proof that you're never to old to still ride!Man lives motorcycles at 83"If this operation on my damn hip isn't a success and I can't ride my motorcycle anymore, then by God they might as well carry me to a hole, dump me in and cover it up."That's what motorbike buff Julius Kegel says as he awaits surgery at the Veterans hospital in Madison.Kegel is 83 years old.The leathery little 147-pounder who lives near Freeport, Ill., has been riding motorcycles since 1910.He raced them, delivered messages on them near front lines in France during World War I, sold them, and courted his late wife, Mary, 3 1/2 years on them before she said yes.Hip bothered himKegel said in a telephone interview that his hip has been bothering him ever since as in a wreck a year ago."I wouldn't go to a doctor because he would tell me to stay off my cycle," said Kegel. "I was all right when I was riding, but balancing it when I stopped was difficult and it got so I had to have a rider go along with me to help."I was off my cycle for 10 months. In June I got back on and rode to a rally in South Carolina. In August I went on the Black Hills Gypsy tour to Sturgis, S.D. for the 29th year."A month ago I strapped my two canes to the handlebars and headed out to a rally in Wisconsin Dells before dawn. When the sun came up it blinded me. I skidded on a patch of gravel trying to stop and broke my shoulder."Shoulder healedKegel said his shoulder healed so well that he decided to enter the hospital on his own to try to have his hip fixed."I wanted to pull on my leathers again, tie a red handkerchief around my neck, pull on my helmet, snap on my face shield and go," he said. "I want to be able to swing into curves again, feel the wind, hear the mechanical noise under me. I want it so much I know everything will be all right. It's all I've got or I'll be done."Ever since he sold his cycle shop in Freeport, in 1960 and retired two years after his wife was killed in an auto accident - Kegel has been (feen?) snorting along the nation's highways and over most of Europe."On the back of my leather jacket is printed: 'Freeport, Ill., U.S.A., he says. "The U.S.A. is there because I've been on motorcycle tours in Europe 19 times and I'm proud where I'm from. I'm not one of those city riders. When I pull on the leathers I'm off for the horizon."Kegel said if worse comes to worse he will add a sidecar to his bicycle so he won't have to hold it in balance when he stops."When I get out of this hospital I've got it all figured out, he said. "I'll put my motorcycle in my pickup truck and drive to Dallas where there is a shop that will put on a sidecar. I've got to be in Daytona Beach (Fla.) in March for a big motorcycle rally. I've been going there for 25 years.#kegel365 #harleydavidson #kegelhd #worldsoldest #365daysofkegelhd