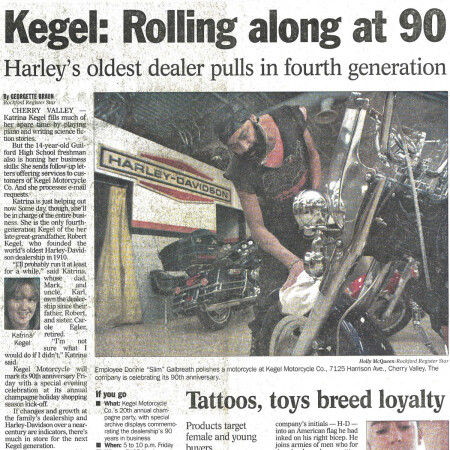 Today we share one of current General Manager Katrina Kegel-Mather's 1st interviews with the press, this one appearing in a November 2000 issue of the Rockford Register Star!(Also, contrary to the article, Katrina is NOT the only fourth generation Kegel and it was Joseph Kegel who founded the dealership in 1910 - Robert was his son).Kegel: Rolling along at 90Harley's oldest dealer pulls in fourth generationKatrina Kegel fills much of her spare time by playing piano and writing science fiction stories.But the 14-year-old Guilford High School freshman also is honing her business skills: She sends follow-up letters offering services to customers of Kegel Motorcycle Co. And she processes e-mail requests.Katrina is just helping out now. Some day, though, she'll be in charge of the entire business. She is the only fourth-generation Kegel of her late great-grandfather, Robert Kegel, who founded the world's oldest Harley-Davidson dealership in 1910."I'll probably run it at least for a while," said Katrina, whose dad, Mark, and uncle, Karl, own the dealership since their father, Robert and sister, Carole Egler, retired.I'm not sure what I would do if I didn't," Katrina said.Kegel Motorcycle will mark its 90th anniversary Friday with a special evening celebration at its annual champagne holiday shopping season kick-off.If changes and growth at the family's dealership and Harley-Davidson over a near-century are indicators, there's much in store for the next Kegel generation.#kegel365 #harleydavidson #kegelhd #worldsoldest #365daysofkegelhd