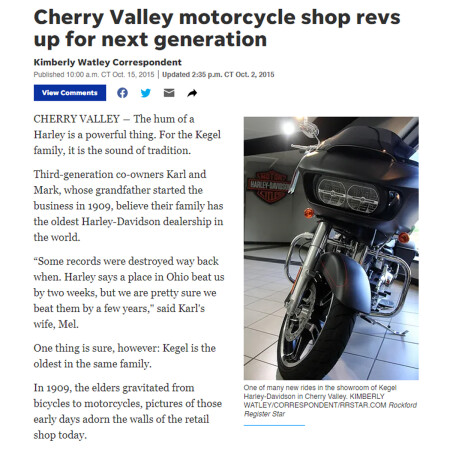 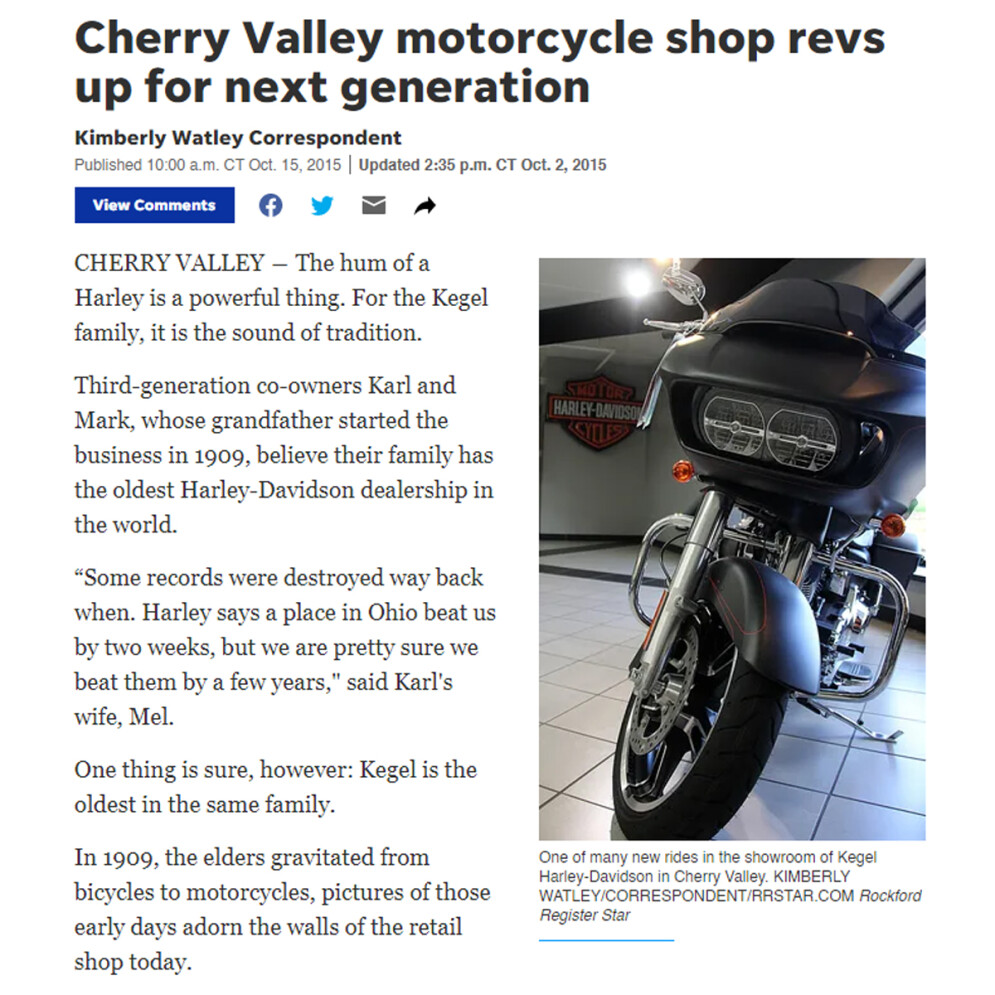 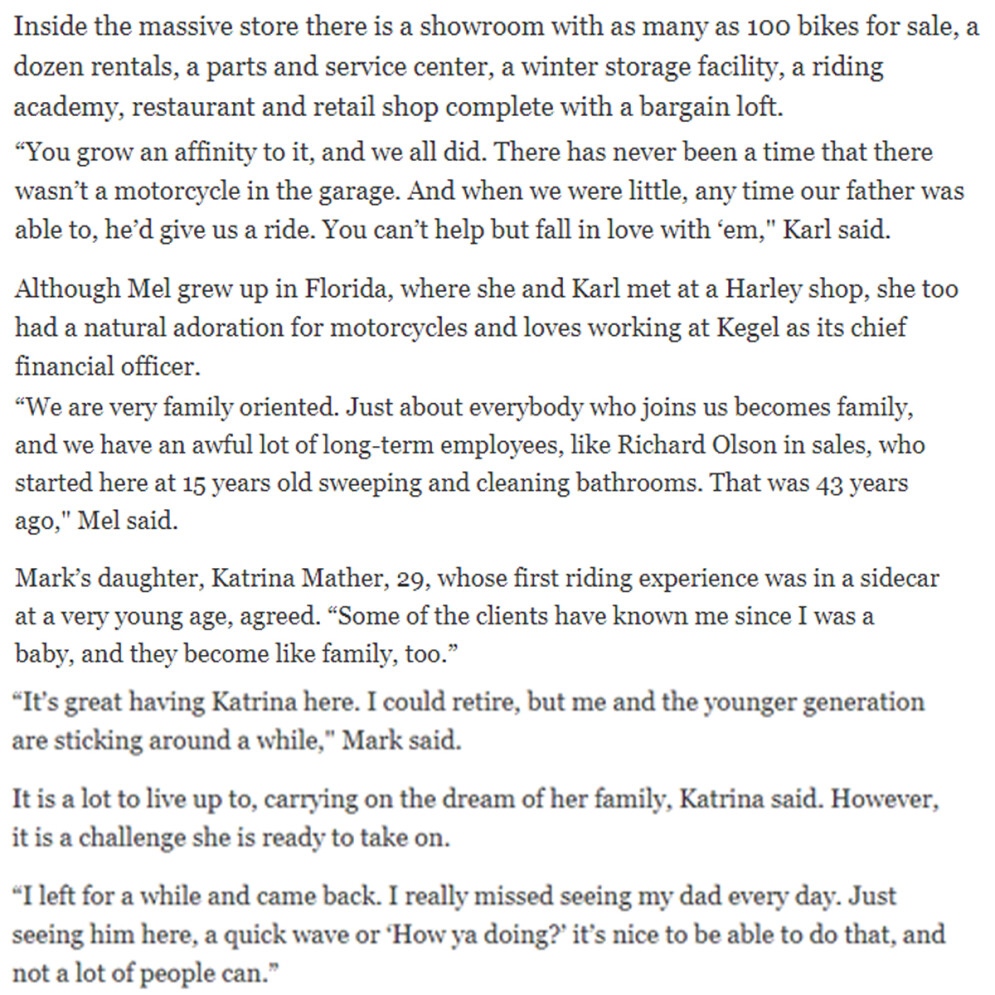 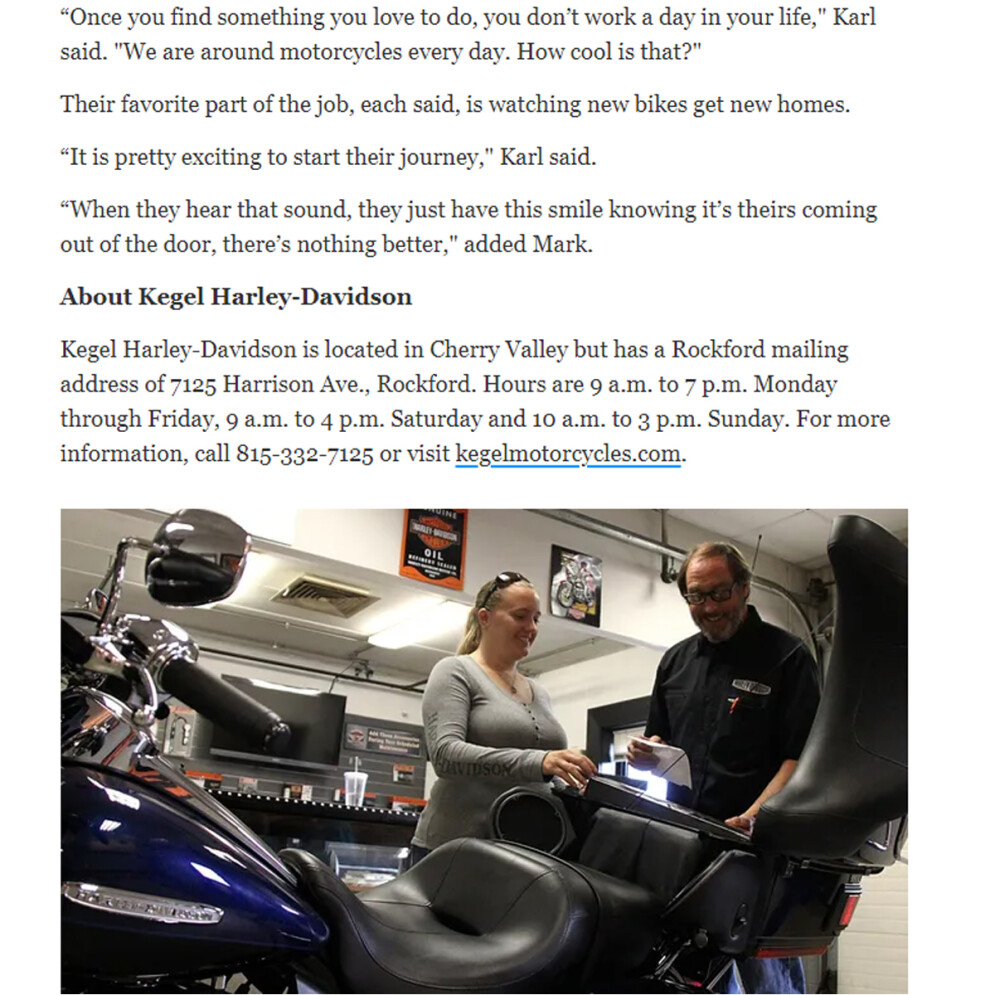 Cherry Valley motorcycle shop revs up for next generationThe hum of a Harley is a powerful thing. For the Kegel family, it is the sound of tradition.Third-generation co-owners Karl and Mark, whose grandfather started the business in 1909, believe their family has the oldest Harley-Davidson dealership in the world."Some records were destroyed way back when. Harley says a place in Ohio beat us by two weeks, but we are pretty sure we beat them by a few years," says Karl's wife, Mel.One thing is sure, however: Kegel is the oldest in the same family.In 1909, the elders gravitated from bicycles to motorcycles, pictures of those early days adorn the walls of the retail shop today.Inside the massive store there is a showroom with as many as 100 bikes for sale, a dozen rentals, a parts and service center, a winter storage facility, a riding academy, restaurant and retail shop complete with a bargain loft."You grow an affinity to it, and we all did. There has never been a time that there wasn't a motorcycle in the garage. And when we were little, any time our father was able to, he'd give us a ride. You can't help but fall in love with 'em," Karl said.Although Mel grew up in Florida, where she and Karl met at a Harley shop, she too had a natural adoration for motorcycles and loves working at Kegel as its chief financial officer."We are very family oriented. Just about everybody who joins us becomes family, and we have an awful lot of long-term employees, like Richard Olson in sales, who started here at 15 years old sweeping and cleaning bathrooms. That was 43 years ago," Mel said.Mark's daughter, Katrina Mather, 29, whose first riding experience was in a sidecar at  very young age, agreed. "Some of the clients have known me since I was a baby, and they become like family, too."It's great having Katrina here. I could retire, but me and the younger generation are sticking around a while," Mark said.It is a lot to live up to, carrying on the dream of her family, Katrina said. However it is a challenge she is ready to take on."I left for a while and came back. I really missed seeing my dad every day. Just seeing him here, a quick wave or 'How ya doing?' it's nice to be able to do that, and not a lot of people can.""Once you find something you love to do, you don't work a day in your life," Karl said. "We are around motorcycles every day. How cool is that?"Their favorite part of the job, each said, is watching new bikes get new homes."It is pretty exciting to start their journey," Karl said."When they hear that sound, the just have this smile knowing it's theirs coming out of the door, there's nothing better," added Mark.#kegel365 #harleydavidson #kegelhd #worldsoldest #365daysofkegelhd