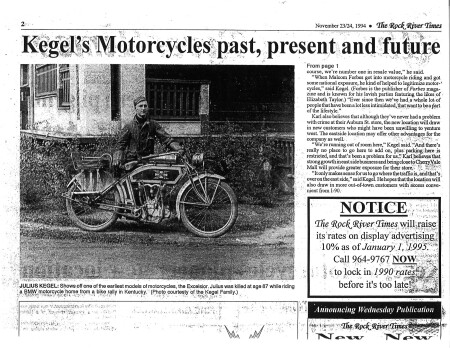 Good news, #365daysofkegelhd readers!If you recall, for day 142 we shared page 1 of an article that ran in the The Rock River Times in November 1994 ( www.kegelmotorcycles.com/news-article/41696/kegel365day142 ) however at the time of posting, page 2 was nowhere to be found... well we found it and here it is:(Continued from previous page)"Right now, Harley-Davidson is probably making some of the finest motorcycles ever built by anybody as far as the quality, the finish, reliability, durability go. And, of course, we're number one in resale value, " he (Karl Kegel) said."When Malcom Forbes got into motorcycle riding and got some national exposure, he kind of helped to legitimize motorcycles," said Kegel. (Forbes is the publisher of Forbes magazine and is known for his lavish parties featuring the likes of Elizabeth Taylor.) "Ever since then we've had a whole lot of people that have been a lot less intimidated, that want to be a part of the lifestyle."Karl also believes that although they've never had a problem with crime at their Auburn St. store, the new location will draw in new customers who might have been unwilling to venture west. The eastside location may offer other advantages for the company as well."We're running out of room here," Kegel said. "And there's really no place to go here to add on, plus parking here is restricted, and that's been a problem for us." Karl believes that strong growth in east side business and being close to CherryVale Mall will provide greater exposure for their store."It only makes sense for us to go where the traffic is, and that's over on the east side," said Kegel. He hopes that the location will also draw in more out-of-town customers with access convenient from I-90.*caption*Julius Kegel: Shows off one of the earliest models of motorcycles, the Excelsior. Julius was killed at age 87 while riding a BMW motorcycle home from a bike rally in Kentucky.#kegelhd #kegel365 #harleydavidson #worldsoldest