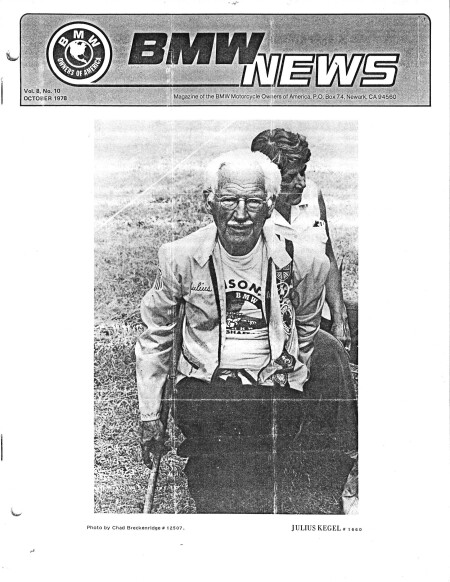 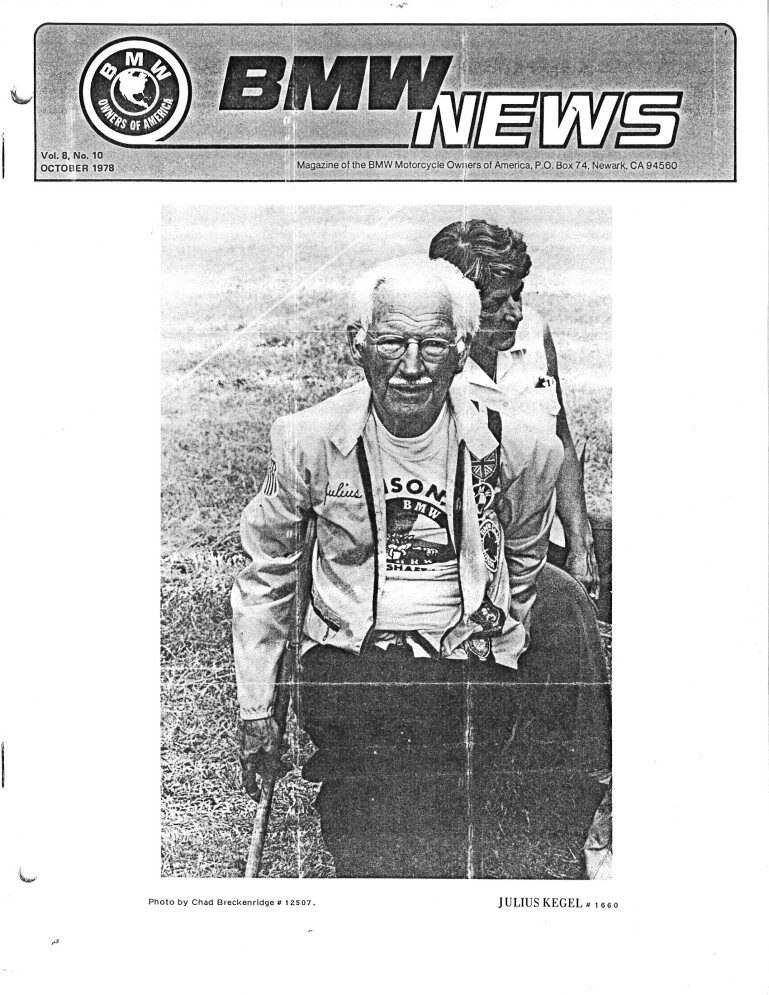 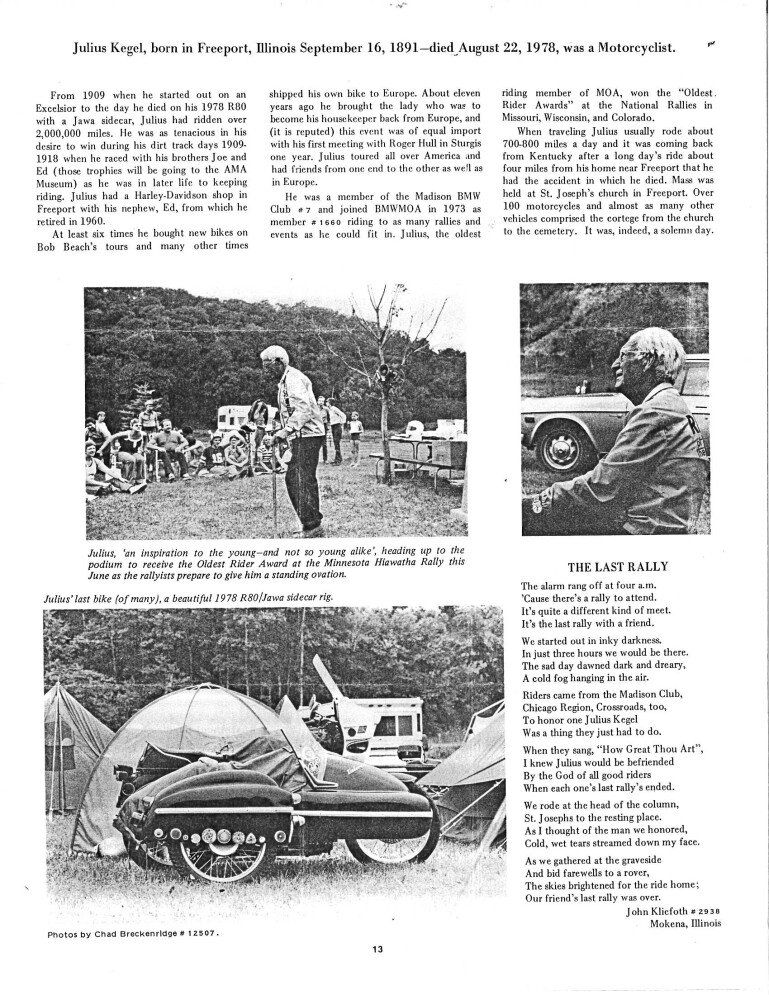 Julius posthumously graced the cover of BMW News in October 1978 and they did a nice remembrance piece on him.Julius Kegel, born in Freeport, Illinois September 16, 1891 - died August 22, 1978, was a Motorcyclist.From 1909 when he started out on an Excelsior to the day he died on his 1978 R80 with a Jawa sidecar, Julius had ridden over 2,000,000 miles. He was as tenacious in his desire to win during his dirt track days 1909-1918 when he raced with his brothers Joe and Ed (those trophies will be going to the AMA Museum) as he was in later life to keeping riding. Julius had a Harley-Davidson shop in Freeport wit his nephew, Ed, from which he retired in 1960.At least six times he bought new bikes on Bob Beach's tours and many other times shipped his own bike to Europe. About eleven years ago he brought the lady who was to become his housekeeper back from Europe, and (it is reputed) this event was of equal import with his first meeting with Roger Hull in Sturgis one year. Julius toured all over America and had friends from one end to the other as well as in Europe.He was a member of the Madison BMW Clube #7 and joined BMWMOA in 1973 as member #1660 riding to as many rallies and events as he could fit in. Julius, the oldest riding member of MOA, won the "Oldest Rider Awards" at the National Rallies in Missouri, Wisconsin, and Colorado.When traveling Julius usually rode about 700-800 miles a day and it was coming back from Kentucky after a long day's ride about four miles from his home near Freeport that he had the accident in which he died. Mass was held at St. Joseph's church in Freeport. Over 100 motorcycles and almost as many other vehicles comprised the cortege from the church to the cemetery. It was, indeed, a solemn day.THE LAST RALLYThe alarm rang off at four a.m.'Cause there's a rally to attend.It's quite a different kind of meet.It's the last rally with a friend.We started out in inky darkness.In just three hours we would be there.The sad day dawned dark and dreary,A cold fog hanging in the air.Riders came from the Madison Club,Chicago Region, Crossroads, too,To honor one Julius KegelWas a thing they just had to do.When they sang, "How Great Thou Art",I knew Julius would be befriendedBy the God of all good ridersWhen each one's last rally's ended.We rode at the head of the column,St. Josephs to the resting place.As I thought of the man we honored,Cold, wet tears streamed down my face.As we gathered at the gravesideAnd big farewells to a rover,The skies brightened for the ride home;Our friend's last rally was over.-John Kliefoth #2938Mokena, IllinoisCaptions:Top middle- Julius, 'an inspiration to the young-and not so young alike', heading up to the podium to receive the Oldest Rider Award at the Minnesota Hiawatha Rally this June as the rallyists prepare to give him a standing ovation.Bottom middle- Julius' last bike (of many), a beautiful 1978 R80/Jawa sidecar rig.Photos by Chad Breckenridge #12507#kegel365 #harleydavidson #kegelhd #worldsoldest #365daysofkegelhd