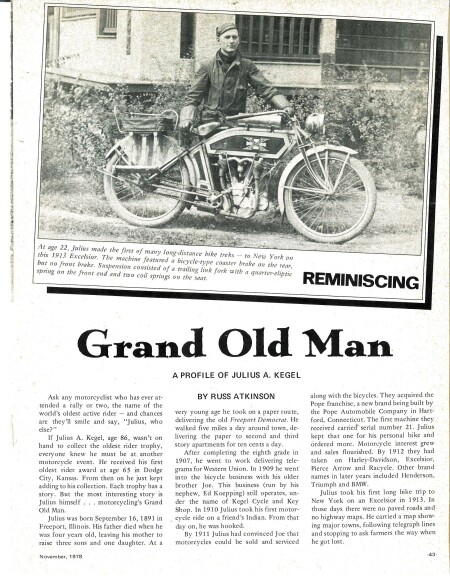 Today we start a profile piece on Julius that appeared in the November 1978 issue of Road Rider in which you've already read page 2 on Day 5 of this #kegel365 series as we just recently found the rest of the article that page came from!Grand Old ManA PROFILE OF JULIUS A. KEGELBy Russ AtkinsonAsk any motorcyclist who has ever attended a rally or two, the name of the world's oldest active rider - and chances are they'll smile and say, "Julius, who else?"If Julius A. Kegel, age 86, wasn't on hand to collect the oldest rider trophy, everyone knew he must be at another motorcycle event. He received his first oldest rider award at age 65 in Dodge City, Kansas. From then on he just kept adding to his collection. Each trophy has a story. But the most interesting story is Julius himself . . . motorcycling's Grand Old Man.Julius was born September 16, 1891 in Freeport, Illinois. His father died when he was four years old, leaving his mother to raise three sons and one daughter. At a very young age he took on a paper route, delivering the old Freeport Democrat. He walked five miles a day around town, delivering the paper to second and third story apartments for ten cents a day.After completing the eighth grade in 1907, he went to work delivering telegrams for Western Union. In 1909 he went into the bicycle business with his older brother Joe. This business (run by his nephew, Ed Koepping) still operates, under the name of Kegel Cycle and Key Shop. In 1910 Julius took his first motorcycle ride on a friend's Indian. From that day on, he was hooked.By 1911 Julius had convinced Joe that motorcycles could be sold and serviced along with the bicycles. They acquired the Pope franchise, a new brand being built by the Pope Automobile Company in Hartford, Connecticut. The first machine they received carried serial number 21. Julius kept that one for his personal bike and ordered more. Motorcycle interest grew and sales flourished. By 1912 they had taken on Harley-Davidson, Excelsior, Pierce Arrow and Racycle. Other brand names in later years included Henderson, Triumph and BMW.Julius took his first long bike trip to New York on an Excelsior in 1913. In those days there were no paved roads and no highway maps. He carried a map showing major towns, following telegraph lines and stopping to ask farmers the way when he got lost.#365daysofkegelhd #harleydavidson #kegelhd #worldsoldest