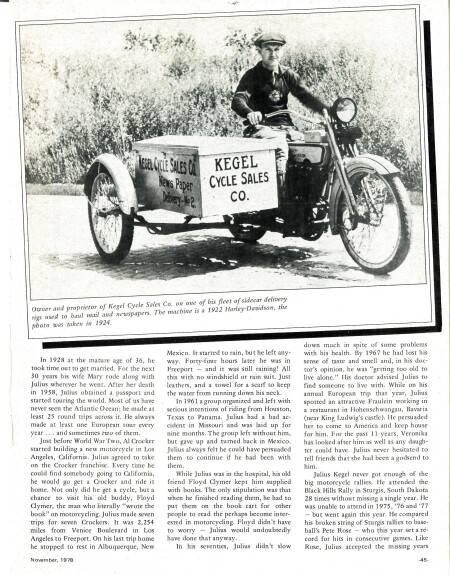 Continuing on with page 3 of Road Rider's November 1978 profile of Julius...In 1928 at the mature age of 36, he took time out to get married. For the next 30 years his wife Mary rode along with Julius wherever he went. After her death in 1958, Julius obtained a passport and started touring the world. Most of us have never seen the Atlantic Ocean; he made at least 25 round trips across it. He always made at least one European tour every year . . . and sometimes two of them.Just before World War Two, Al Crocker started building a new motorcycle in Los Angeles, California. Julius agreed to take on the Crocker franchise. Every time he could find somebody going to California, he would go get a Crocker and ride it home. Not only did he get a cycle, but a chance to visit his old buddy, Floyd Clymer, the man who literally "wrote the book" on motorcycling. Julius made seven trips for seven Crockers. It was 2,254 miles from Venice Boulevard in Los Angeles to Freeport. On his last trip home he stopped to rest in Albuquerque, New Mexico. It started to rain, but he left anyway. Forty-four hours later he was in Freeport - and it was still raining! All this with no windshield or rain suit. Just leathers, and a towel for a scar to keep the water from running down his neck.In 1961 a group organized and left with serious intentions of riding from Houston, Texas to Panama. Julius had a bad accident in Missouri and was laid up for nine months. The group left without him, but gave up and turned back in Mexico. Julius always felt he could have persuaded them to continue if he had been with them.While Julius was in the hospital, his old friend Floyd Clymer kept him supplied with books. The only stipulation was that when he finished reading them, he had to put them on the book cart for other people to read the perhaps become interested in motorcycling. Floyd didn't have to worry - Julius would undoubtedly have done that anyway.In his seventies, Julius didn't slow down much in spite of some problems with his health. By 1967 he had lost his sense of taste and smell and, in his doctor's opinion, he was "getting too old to live alone." His doctor advised Julius to find someone to live with. While on his annual European trip that year, Julius spotted an attractive Fraulein working in a restaurant in Hohenschwangau, Bavaria (near King Ludwig's castle). He persuaded her to come to America and keep house for him. For the past 11 years, Veronika has looked after him as well as any daughter could have. Julius never hesitated to tell friends that she had been a godsend to him.Julius Kegel never got enough of the big motorcycle rallies. He attended the Black Hills Rally in Sturgis, South Dakota 28 times without missing a single year. He was unable to attend in 1975, '76 and '77 - but went again this year. He compared his broken string of Sturgis rallies to baseball's Pete Rose - who this year set a record for hits in consecutive games. Like Rose, Julius accepted the missing years philosophically, and intended to start over.#365daysofkegelhd #kegel365 #harleydavidson #kegelhd #worldsoldest