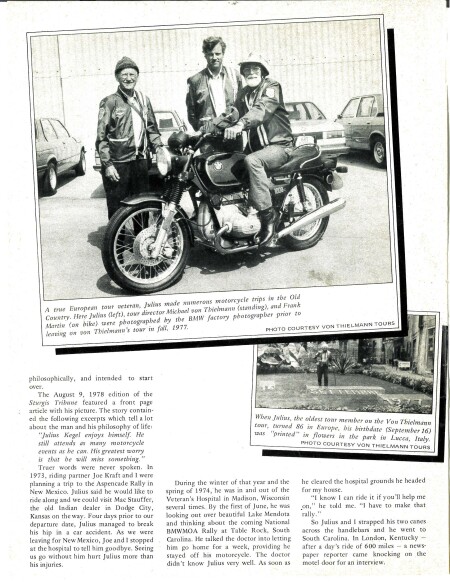 Page 4 of Road Rider's profile on Julius continues below!The August 9, 1978 edition of the Sturgis Tribune featured a front page article with his picture. The story contained the follow excerpts which tell a lot about the man and his philosophy of life:"Julius Kegel enjoys himself. He still attends as many motorcycle events as he can. His greatest worry is that he will miss something."Truer words were never spoken. In 1973, riding partner Joe Kraft and I were planning a trip to the Aspencade Rally in New Mexico. Julius said he would like to ride along and we could visit Mac Stauffer, the old Indian dealer in Dodge City, Kansas on the way. Four days prior to our departure date, Julius managed to break his hip in a car accident. As we were leaving for New Mexico, Joe and I stopped at the hospital to tell him goodbye. Seeing us go without him hurt Julius more than his injuries.During the winter of that year and the spring of 1974, he was in and out of the Veteran's Hospital in Madison, Wisconsin several times. By the first of June, he was looking out over beautiful Lake Mendota and thinking about the coming National BMWMOA Rally at Table Rock, South Carolina. He talked the doctor into letting him go home for a week, providing he stayed off his motorcycle. The doctor didn't know Julius very well. As soon as he cleared the hospital grounds he headed for my house."I know I can ride it if you'll help me on," he told me. "I have to make that rally."So Julius and I strapped his two canes across the handlebars and he went to South Carolina. In London, Kentucky - after a day's ride of 600 miles - a newspaper reporter came knocking on the motel door for an interview.Photo captions:Top- A true European tour veteran, Julius made numerous motorcycle trips in the Old Country. Here Julius (left), tour director Michael von Thielmann (standing), and Frank Martin (on bike) were photographed by the BMW factory photographer prior to leaving on von Thielmann's tour in fall, 1977.Bottom- When Julius, the oldest tour member of the Von Thielmann tour, turned 86 in Europe, his birthdate (September 16) was "printed" in flowers in the park in Lucca, Italy.#kegel365 #harleydavidson #kegelhd #worldsoldest #365daysofkegelhd