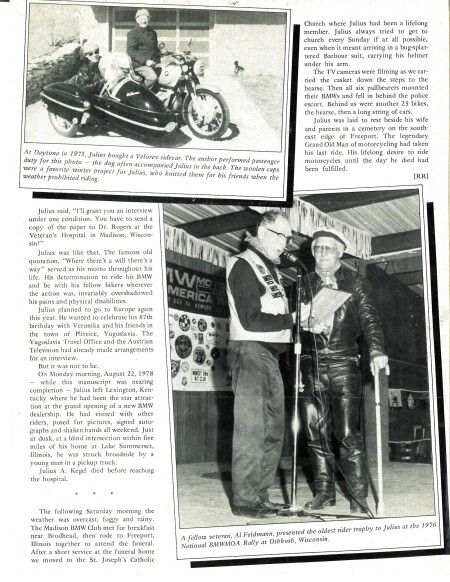 And today we conclude Road Rider's profile on Julius:Julius said, "I'll grant you an interview under one condition. You have to send a copy of the paper to Dr. Rogers at the Veteran's Hospital in Madison, Wisconsin!"Julius was like that. That famous old quotation. "Where there's a will there's a way" served as his motto throughout his life. His determination to ride his BMW and be with his fellow bikers wherever the action was, invariably overshadowed his pains and physical disabilities.Julius planned to go to Europe again this year. He wanted to celebrate his 87th birthday with Veronika and his friends in the town of Plitvice, Yugoslavia. The Yugoslavia Travel Office and Austrian Television had already made arrangements for an interview.But it was not to be.On Monday morning, August 22, 1978 - while this manuscript was nearing completion - Julius left Lexington, Kentucky where he had been the star attraction at the grand opening of a new BMW dealership. He had visited with other riders, posed for pictures, signed autographs and shaken hands all weekend. Just at dusk, at a blind intersection within five miles of his home at Lake Summerset, Illinois, he was struck broadside by a young man in a pickup truck.Julius A. Kegel died before reaching the hospital. ***The following Saturday morning the weather was overcast, foggy and rainy. The Madison BMW Club met for breakfast near Brodhead, then rode to Freeport, Illinois together to attend the funeral. After a short service at the funeral home we moved to the St. Joseph's Catholic Church where Julius had been a lifelong member. Julius always tried to get to church every Sunday if at all possible, even when it meant arriving in a bug-splattered Barbour suit, carrying his helmet under his arm.The TV cameras were filming as we carried the casket down the steps to the hearse. Then all six pallbearers mounted their BMWs and fell in behind the police escort. Behind us were another 25 bikes, the hearse, then a long string of cars.Julius was laid to rest beside his wife and parents in a cemetery on the southeast edge of Freeport. The legendary Grand Old Man of motorcycling had taken his last ride. His lifelong desire to ride motorcycles until the day he died had been fulfilled.Photo captions:Top- At Daytona in 1975, Julius bought a Velorex sidecar. The author performed passenger duty for this photo - the dog often accompanied Julius in the back. The woolen caps were a favorite winter project for Julius, who knitted them for his friends when weather prohibited riding.Bottom- A fellow veteran, Al Feldmann, presented the oldest rider trophy to Julius at the 1976 National BMWMIA Rally at Oshkosh, Wisconsin.#365daysofkegelhd #kegel365 #harleydavidson #kegelhd #worldsoldest