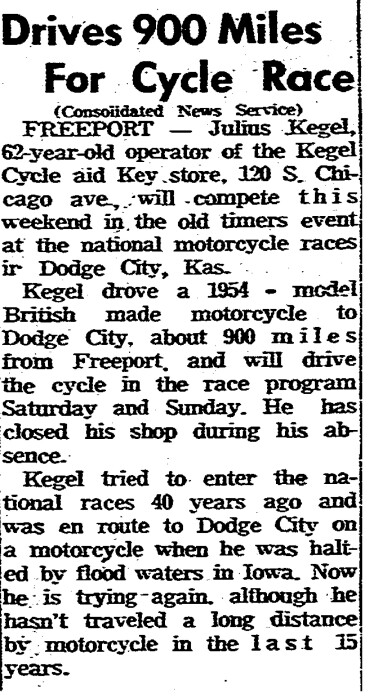 On this day in 1954, it was reported in the Rockford Morning Star that Julius took off on a 900 mile ride!"Drives 900 Miles for Cycle RaceFreeport- Julius Kegel, 62-year-old operator of the Kegel Cycle aid Key store, 120 S. Chicago ave, will compete this weekend in the old timers event at the national motorcycle races in Dodge City, Kas.Kegel drove a 1954 - model British made motorcycle to Dodge City, about 900 miles from Freeport, and will drive the cycle in the race program Saturday and Sunday. He has closed his shop during his absence.Kegel tried to enter the national races 40 years ago and was en route to Dodge City on a motorcycle when he was halted by flood waters in Iowa. Now he is trying again. although he hasn't traveled a long distance by motorcycle in the last 15 years."#kegel365 #harleydavidson #kegelhd #worldsoldest #365daysofkegelhd #patriotic #4thofjuly