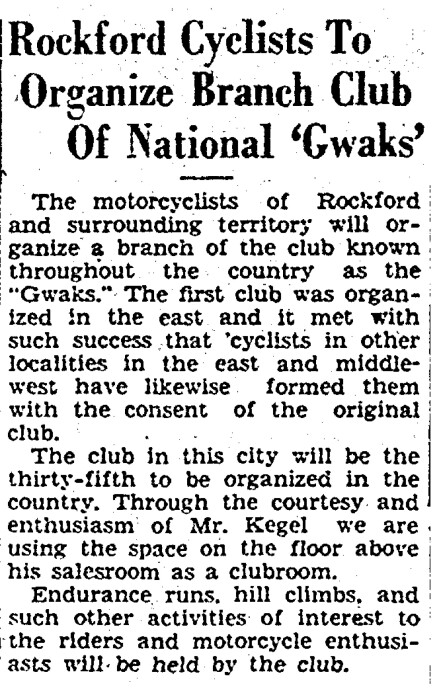 Ever heard of the Rockford branch of the "Gwaks" club, formed in April of 1930?As clipped from one of the local newspapers:Rockford Cyclists To Organize Branch Club Of National 'Gwaks'The motorcyclists of Rockford and surrounding territory will organize a branch of the club known throughout the country as the "Gwaks." The first club was organized in the east and it met with such success that 'cyclists in other localities in the east and middle-west have likewise formed them with the consent of the original club.The club in this city will be the thirty-fifth to be organized in the country. Through the courtesy and enthusiasm of Mr. Kegel we are using the space on the floor above his salesroom as a clubroom.Endurance runs, hill climbs, and such other activities of interest to the riders and motorcycle enthusiasts will be held by the club.#kegel365 #harleydavidson #kegelhd #worldsoldest #365daysofkegelhd