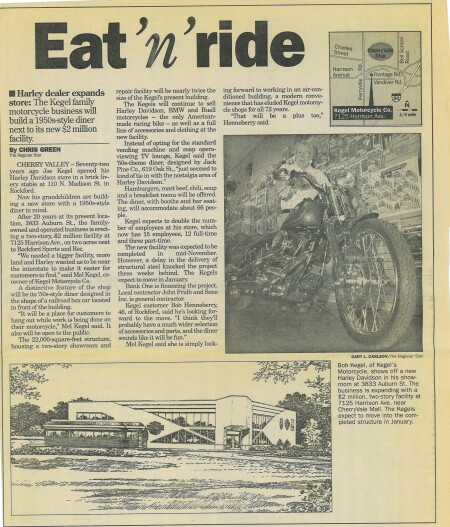 Keeping with the theme this weekend's #365daysofkegelhd posts of the groundbreaking of the Harrison Ave location, here's a piece from 1995 that was published in the Rockford Register Star!Eat'n'rideHarley dealer expands store: The Kegel family motorcycle business will build a 1950s-style diner next to its new $2 million facility.Cherry Valley- Seventy-two years ago Joe Kegel opened his Harley Davidson store in a brick livery stable at 100 N. Madison St. in Rockford.Now his grandchildren are building a new store with a 1950s-style diner in mind.After 20 years at its present location, 3833 Auburn St., the family-owned and operated business is erecting a two-story, $2 million facility at 7125 Harrison Ave., on two acres next to Rockford Sports and Rec."We needed a bigger facility, more land and Harley wanted us to be near the interstate to make it easier for customers to find," said Mel Kegel, co-owner of Kegel Motorcycle Co.A distinctive feature of the shop will be its '50s-style diner designed in the shape of a railroad box car located in front of the building."It will be a place for customers to hang out while work is being done on their motorcycle," Mel Kegel said. It also will be open to the public.The 22,000-square-feet structure, housing a two-story showroom and repair facility will be nearly twice the size of the Kegel's present building.The Kegels will continue to sell Harley Davidson, BMW and Buell motorcycles - the only American-made racing bike - as well as a full line of accessories and clothing at the new facility.Instead of opting for the standard vending machine and soap opera-viewing TV lounge, Kegel said the '50s-theme diner, designed by Jack Pine Co., 619 Oak St., "just seemed to kind of tie in with the nostalgia area of Harley Davidson."Hamburgers, roast beef, chili, soup and a breakfast menu will be offered. The diner, with booths and bar seating, will accommodate about 66 people.Kegel expects to double the number of employees at his store, which now has 15 employees, 12 full-time and three part-time.The new facility was expected to be completed in mid-November. However, a delay in the delivery of structural steel knocked the project three weeks behind. The Kegels expect to move in January.Bank One is financing the project. Local contractor John Fridh and Sons Inc. is general contractor.Kegel customer Bob Henneberry, 46, of Rockford, said he's looking forward to the move. "I think they'll probably have a much winder selection of accessories and parts, and the diner sounds like it will be fun."Mel Kegel said she is simply looking forward to working in an air-conditioned building, a modern convenience that has eluded Kegel motorcycle shops for all 72 years."That will be a plus too," Henneberry said.Photo caption, bottom right:Bob Kegel, of Kegel's Motorcycle, shows off a new Harley Davidson in his showroom at 3833 Auburn St. The business is expanding with a $2 million, two-story facility at 7125 Harrison Ave. near CherryVale Mall. The Kegels expect to move into the completed structure in January.#kegel365 #harleydavidson #kegelhd #worldsoldest