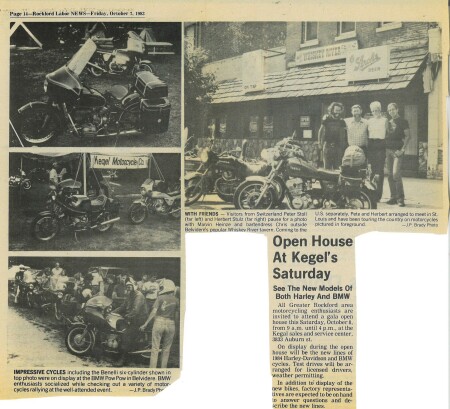 Did you attend the fall 1983 Open House at Auburn Street?As seen in the Rockford Labor NEWS:Open House At Kegel's SaturdaySee The New Models Of Both Harley And BMWAll Greater Rockford area motorcycling enthusiasts are invited to attend a gala open house this Saturday, October 8, from 9 a.m. until 4 p.m., at the Kegal sales and service center, 3833 Auburn st.On display during the open house will be the new lines of 1984 Harley-Davidson and BMW cycles. Test drives will be arranged from licensed drivers, weather permitting.In addition to display of the new bikes, factory representatives are expected to be on hand to answer questions and described the new lines.Bottom left caption:IMPRESSIVE CYCLES including the Benelli six-cylinder shown in top photo were on display at the BMW Pow Pow in Belvidere. BMW enthusiasts socialized while checking out a variety of motorcycles rallying at the well-attended event.Middle right caption:WITH FRIENDS - Visitors from Switzerland Peter Stoll (far left) pause for a photo with Marvin Heinze and bartendress Chris outside Belvidere's popular Whiskey River tavern. Coming to the U.S. separately, Pete and Herbert arranged to meet in St. Louis and have been touring the country on motorcycles pictured in foreground.-J.P. Brady Photos#365daysofkegelhd #kegel365 #harleydavidson #kegelhd #worldsoldest