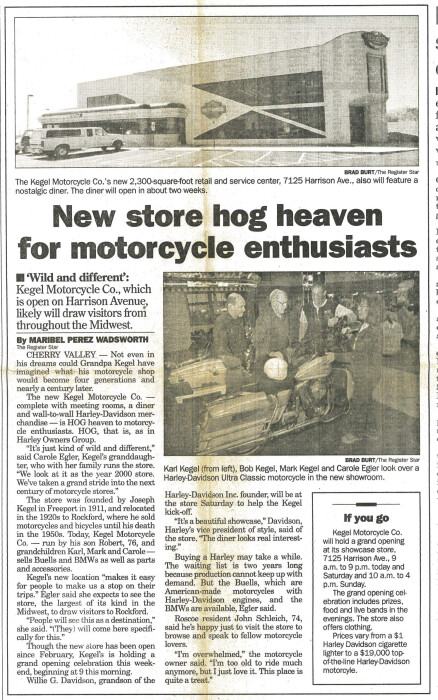 Today we share another article we found that the Rockford Register Star had printed in early 1996 about our upcoming grand opening weekend at the Harrison location!New store hog heaven for motorcycle enthusiasts'Wild and different':Kegel Motorcycle Co., which is open on Harrison Avenue, likely will draw visitors from throughout the Midwest.Not even in his dreams could Grandpa Kegel have imagined what his motorcycle shop would become four generations and nearly a century later.The new Kegel Motorcycle Co. - complete with meeting rooms, a diner and wall-to-wall Harley-Davidson merchandise - is HOG heaven to motorcycle enthusiasts. HOG, that is, as in Harley Owners Group."It's just kind of wild and different," said Carole Egler, Kegel's granddaughter, who with her family runs the store. "We look at it as the year 2000 store. We've taken a grand stride into the next century of motorcycle stores."The store was founded by Joseph Kegel in Freeport in 1911, and relocated in the 1920s to Rockford, where he sold motorcycles and bicycles until his death in the 1950s. Today, Kegel Motorcycle Co. - run by his son Robert, 76, and grandchildren Karl, Mark and Carole - sells Buells and BMWs as well as parts and accessories.Kegel's new location "makes it easy for people to make us a stop on their trips." Egler said she expects to see the store, the largest of its kind in the Midwest, to draw visitors to Rockford."People will see this as a destination," she said. "(They) will come here specifically for this."Though the new store has been open since February, Kegel's is holding a grand opening celebration this weekend, beginning at 9 this morning.Willie G. Davidson, grandson of Harley-Davidson Inc. founder, will be at the store Saturday to help the Kegel kick-off."It's a beautiful showcase," Davidson, Harley's vice president of style, said of the store. "The diner looks real interesting."Buying a Harley may take a awhile. The waiting list is two years long because production cannot keep up with demand. But the Buells, which are American-made motorcycles with Harley-Davidson engines, and the BMWs are available, Egler said.Roscoe resident John Schleich, 74, said he's happy just to visit the store to browse and speak to fellow motorcycle lovers."I'm overwhelmed," the motorcycle owner said. "I'm too old to ride much anymore, but I just love it. This place is quite a treat."#kegel365 #harleydavidson #kegelhd #worldsoldest #365daysofkegelhd