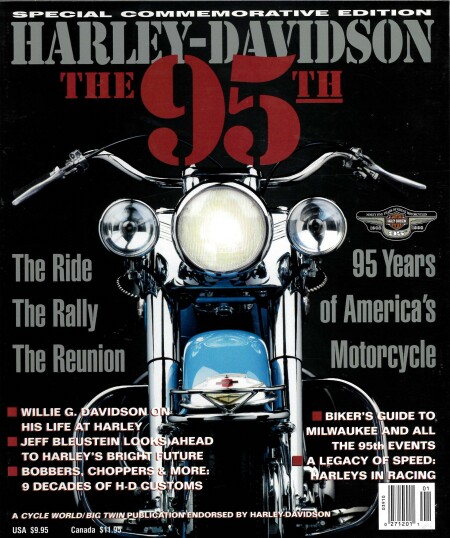 In 1998, Harley published a special 95th Anniversary magazine and in it contained an article about the 3 oldest dealers in the company (which includes #Kegelhd!). 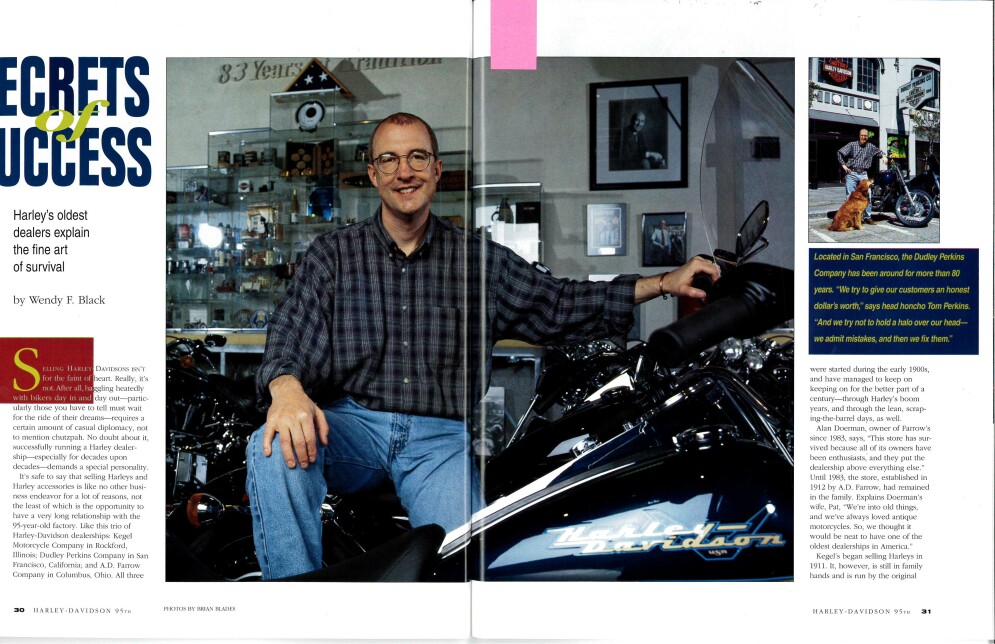 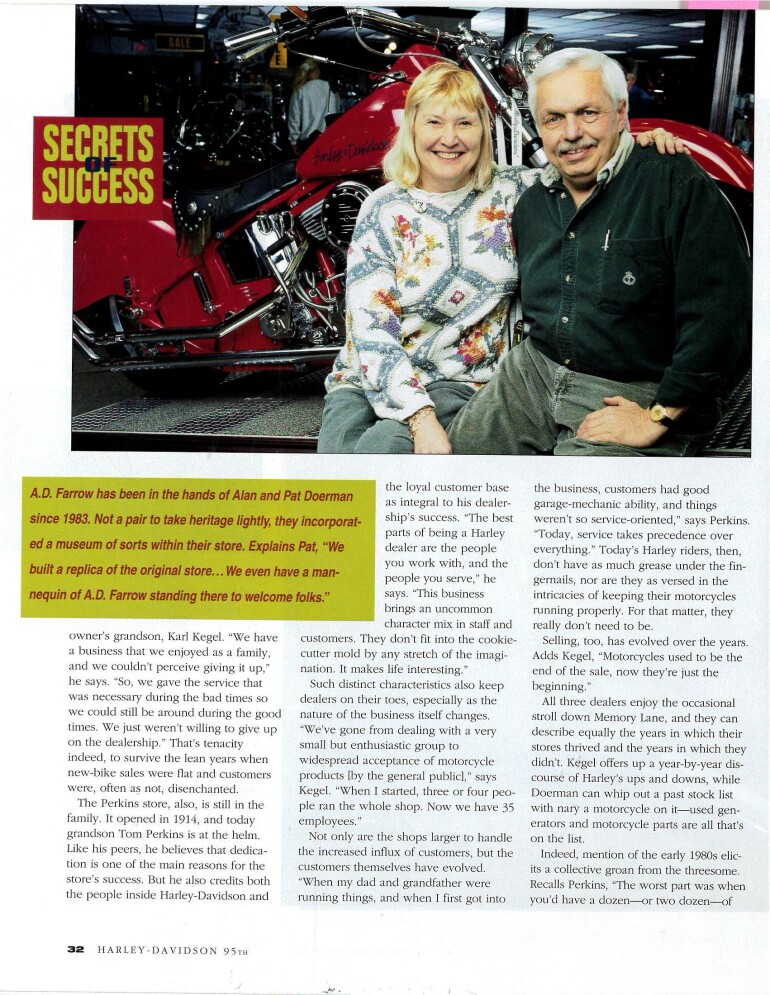 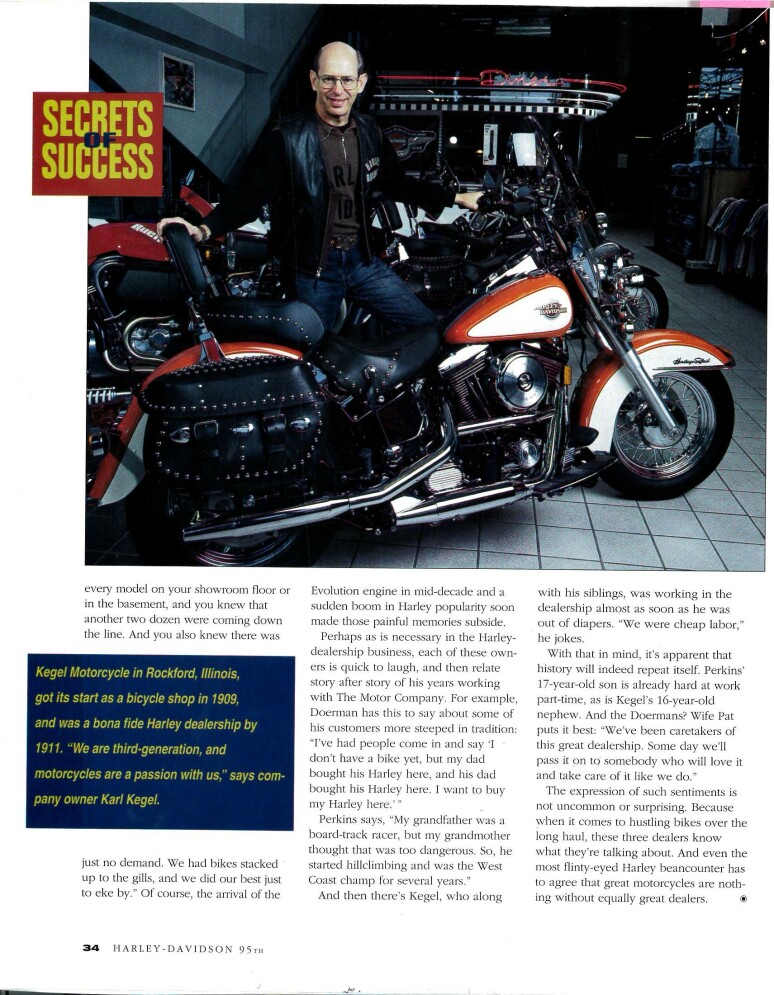 Selling Harley-Davidsons isn't for the faint of heart. Really, it's not. After all, haggling heatedly with bikers day in and day out - particularly those you have to tell must wait for the ride of their dreams - requires a certain amount of casual diplomacy, not to mention chutzpah. No doubt about it, successfully running a Harley dealership - especially for decades upon decades - demands a special personality.

It's safe to say that selling Harleys and Harley accessories is like no other business endeavor for a lot of reasons, not the least of which is the opportunity to have a very long relationship with the 95-year-old factory. Like this trio of Harley-Davidson dealerships: Kegel Motorcycle Company in Rockford, Illinois; Dudley Perkins Company in San Francisco, California; and A.D. Farrow Company in Columbus, Ohio. All three were started during the early 1900s, and have managed to keep on keeping on for the better part of a century - through Harley's boom years, and through the lean, scrap-the-barrel days, as well.

Alan Doerman, owner of Farrow's since 1983, says, "This store has survived because all its owners have been enthusiasts, and they put the dealership above everything else." Until 1983, the store, established in 1912 by A.D. Farrow, had remained in the family. Explains Doerman's wife, Pat, "We're into old things, and we've always loved antique motorcycles. So, we thought it would be neat to have one of the oldest dealerships in America."

Kegel's began selling Harleys in 1911. It, however, is still in the family hands and is run by the original owner's grandson, Karl Kegel. "We have a business that we enjoyed as a family, and we couldn't perceive giving it up," he says. "So, we gave the service that was necessary during the bad times so we could still be around during the good times. We just weren't willing to give up on the dealership." That's tenacity indeed, to survive the lean years when new-bike sales were flat and customers were, often as not, disenchanted.

The Perkins store, also, is still in the family. It opened in 1914, and today grandson Tom Perkins is at the helm. Like his peers, he believes that dedication is one of the main reasons for the store's success. But he also credits both the people inside Harley-Davidson and the loyal customer base as integral to his dealership's success. "The best parts of being a Harley dealer are the people you work with, and the people you serve," he says. "This business brings an uncommon character mix in staff and customers. They don't fit into the cookie-cutter mold by any stretch of the imagination. It makes life interesting."

Such distinct characteristics also keep dealers on their toes, especially as the nature of the business itself changes. "We've gone from dealing with a very small but enthusiastic group to widespread acceptance of motorcycle products [by the general public]," says Kegel. "When I started, three or four people ran the whole shop. Now we have 35 employees."

Not only are the shops larger to handle the increased influx of customers, but the customers themselves have evolved. "When my dad and grandfather were running things, and when I first got into the business, customers had good garage-mechanic ability, and things weren't so serviced-oriented," says Perkins. "Today, service takes precedence over everything." Today's Harley riders, then, don't have as much grease under the fingernails, nor are they as versed in the intricacies of keeping their motorcycles running properly. For that matter, they really don't need to be.

Selling, too, has evolved over the years. Adds Kegel, "Motorcycles used to be the end of the sale, now they're just the beginning."

Al three dealers enjoy the occasional stroll down Memory Lane, and they can describe equally the years in which their stores thrived and the years in which they didn't. Kegel offers up a year-by-year discourse of Harley's ups and downs, while Doerman can whip out a past stock list with nary a motorcycle on it - used generators and motorcycle parts are all that's on the list.

Perhaps as is necessary in the Harley-dealership business, each of these owners is quick to laugh, and then relate story after story of his years working with The Motor Company. For example, Doerman has this to say about some of his customers more steeped in tradition: "I've had people come in and say 'I don't have a bike yet, but my dad bought his Harley here, and his dad bought his Harley here. I want to buy my Harley here.'"

Perkins says, "My grandfather was a board-track racer, but my grandmother thought that was too dangerous. So, he started hillclimbing and was the West Coast champ for several years."

And then there's Kegel, who along with his siblings, was working in the dealership almost as soon as he was out of diapers. "We were cheap labor," he jokes.

With that in mind, it's apparent that history will indeed repeat itself. Perkins' 17-year-old son is already hard at work part-time, as it Kegel's 16-year-old nephew. And the Doermans? Wife Pat puts it best: "We've been caretakers of this great dealership. Some day we'll pass it on to somebody who will love it and take care of it like we do."

The expression of such sentiments is not uncommon or surprising. Because when it comes to hustling bikes over the long haul, these three dealers know what they're talking about. And even the most flinty-eyed Harley beancounter has to agree that great motorcycles are nothing without equally great dealers.