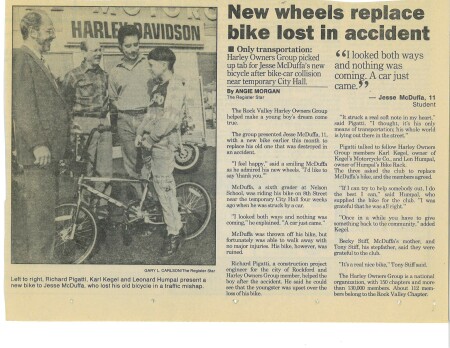 Here's a throwback article that was published in the Rockford Register Star during our Auburn St. years of when Rock River HOG helped a local child in need!New Wheels Replace Bike Lost in AccidentOnly transportation: Harley Owners Group picked up tab for Jesse McDuffa's new bicycle after bike-car collision near temporary City Hall.The Rock Valley Harley Owners Group helped make a young boy's dream come true.The group presented Jesse McDuffa, 11, with a new bike earlier this month to replace his old one that was destroyed in an accident."I feel happy," said a smiling McDuffa as he admired his new wheels. "I'd like to say 'thank you.'"McDuffa, a sixth grader at Nelson School, was riding his bike on 8th Street near the temporary City Hall four weeks ago when he was struck by a car."I looked both ways and nothing was coming," he explained. "A car just came."McDuffa was thrown off his bike, but fortunately was able to walk away with no major injuries. His bike, however, was ruined.Richard Pigatti, a construction project engineer for the city of Rockford and Harley Owners Group member, helped the boy after the accident. He said he could see that the youngster was upset over the loss of his bike."It struck a real soft note in my heart," said Pigatti. "I thought, it's his only means of transportation; his whole world is lying out there in the street."Pigatti talked to fellow Harley Owners Group members Karl Kegel, owner of Kegel's Motocycle Co., and Len Humpal, owners of Humpal's Bike Rack. The three asked the club to replace McDuffa's bike, and the members agreed."If I can try to help somebody out, I do the best I can," said Humpal, who supplied the bike for the club. "I was grateful that he was all right.""Once in awhile you have to give something back to the community," added Kegel.Becky Stiff, McDuffa's mother, and Tony Stiff, his stepfather, said they were grateful to the club."It's a real nice bike," Tony Stiff said.The Harley Owners Group is a national organization, with 150 chapters and more than 130,000 members. About 112 members belong to the Rock Valley Chapter.#kegel365 #harleydavidson #kegelhd #worldsoldest #365daysofkegelhd