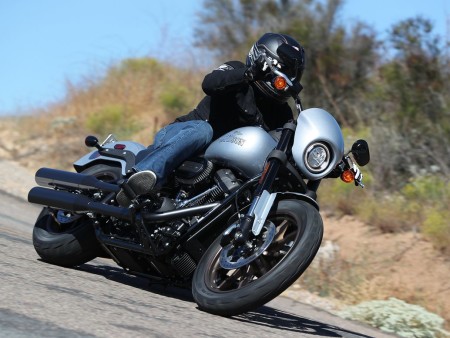 You'd think that tooling along an empty country road in the sunny Laguna Mountains east of San Diego on a beefed-up, reinvented performance cruiser through a warm autumn afternoon would be the perfect antidote to the angst of modern life. No traffic lights, no strip malls, no endless media chatter. Just dopey optimism 2020 Harley-Davidson Low Rider S strafing twisted miles of deserted back road.

OK, so I’ll admit to glazing over a bit as the day warmed up and the gut-bomb lunch burrito settled into digestion mode, but, no, my brainpan just couldn’t stop spinning. Mostly it couldn’t help but wonder at just how different the bike below me was than the Dyna Low Rider S, which left the lineup in 2017. 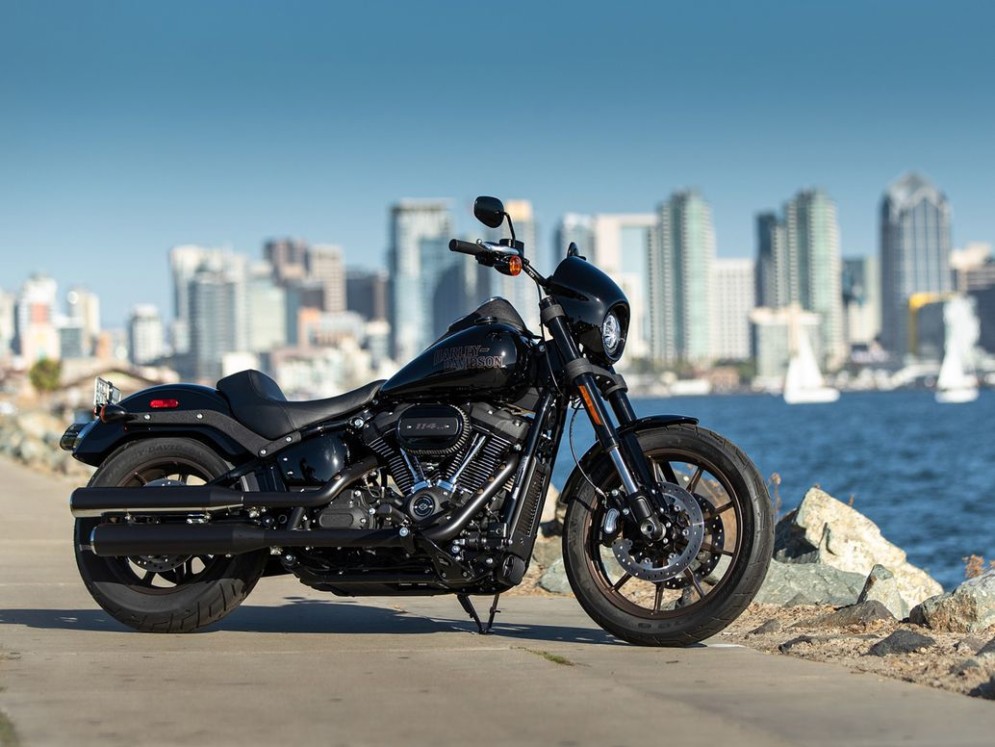 Originally rolled out in 2016, the tall and skinny and streetwise Dyna Low Rider S was an instant classic, but unfortunately it wouldn’t last long. Harley decided to cull its portfolio soon after, and when the smoke cleared the entire Dyna line was gone, and not even the mighty S had withstood the axe. Naturally, the backlash was swift and furious. Grown men cried, fists were raised, and threatening letters were sent. And The Motor Company took copious notes. All of which explains Harley’s reintroduction of the Low Rider S, now making its re-debut as a 2020 Softail.

At the press intro, Harley associates were quick to stress that the new Low Rider S is a nod to the past and a look to the future, which is a convenient way of saying the last model had more than its share of fans. So after a two-year hiatus, in its new guise as a modern Softail, the LRS gains a lighter chassis and the smoother 114 motor, which bestows added ponies as well as a touch more grunt at a lower rpm than the previous Twin Cam 110 setup. But there’s a lot more going on here too. 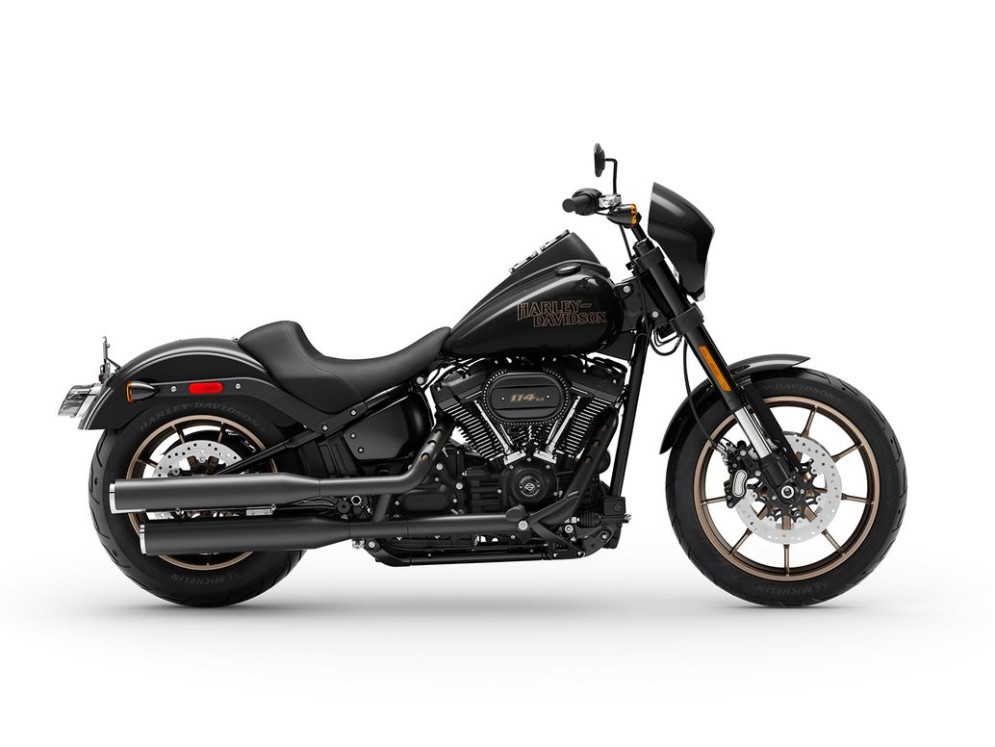 It may not look all that different, but at its core, the new Low Rider S gets a major reshuffle. The Softail chassis is a huge bump over the previous Dyna arrangement, with a lighter, stiffer frame riding on up-spec suspension components. One of the keys here is the new 43mm inverted fork, set at a steeper 28-degree angle compared with the 30 degrees on the standard Low Rider (and the older Dyna model). Inside the fork you’ll find a single-cartridge triple-rate spring, while out back a single coil-over shock hidden under the seat has hydraulically adjustable preload. 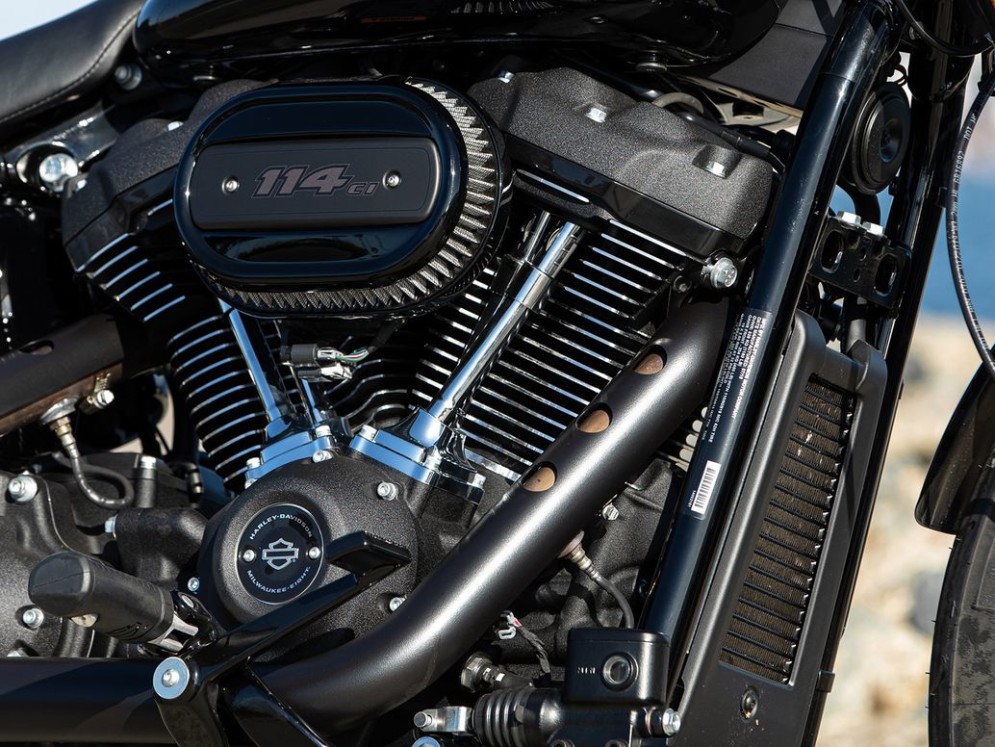 You only get one engine option with the new Low Rider S, but it’s more than up to the task of hauling around the newest Softail—the rigid-mounted Milwaukee-Eight 114 engine (114 CID; 1,868cc) has the most displacement you can get in the Softail chassis from the factory, with a claimed 119 pound-feet of torque at 3,000 rpm on standby. In this application, the M-8 114 shines, offering easily accessible grunt down low, with a minimum of vibes at the bars. Front and center within the vee is a Gloss Black Ventilator air intake with an exposed filter element to improve airflow, with 2-into-2 offset shotgun mufflers framing the back end. 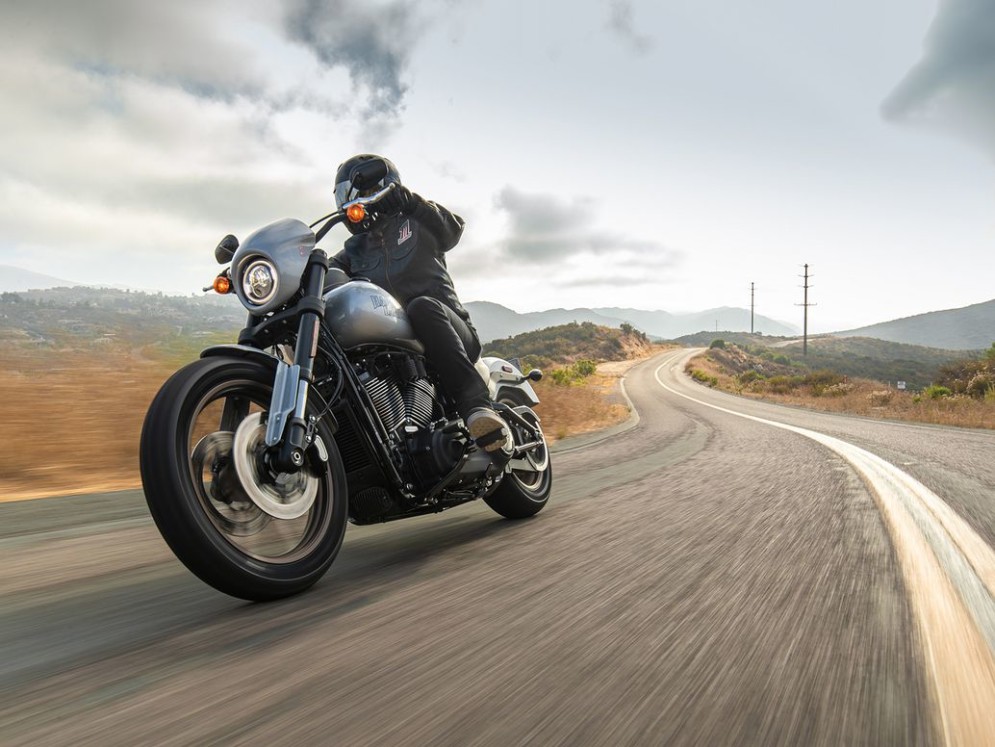 We can talk specs all day long but probably more essential to the Low Rider S is its stylistic approach, and on that point, it takes a fairly similar tack to the dearly departed Dyna. The look is aggressive and befitting a SoCal West Coast style, with a contemporary feel. Key to this “Club” or “Coastal” style, whatever you want to call it, are the raised hand controls anchored by a 1-inch-diameter motocross-style handlebar perched atop 4-inch straight risers. A color-matched mini-fairing frames the recessed LED headlamp just to the front of the bar, for a similar look and feel to the previous S model. The setup puts you in a more aggressive riding position with a high-back solo seat on the other end to keep your butt in the chair when you pin the throttle.

Moody and menacing seems to have also been a big part of the design focus too, so most of the finishes on the new Low Rider S remain on the dark side. The powertrain, primary cover, and tank console get a wrinkle black finish, while the derby cover, intake, and lower rocker covers are Gloss Black. The mufflers and exhaust shields, meanwhile—well, you get it. On either end are cast-aluminum wheels, with a 19-incher up front and a 16-inch rear in a finish called Matte Dark Bronze, which subtly recalls the elder Low Rider’s Magnum Gold hoops. 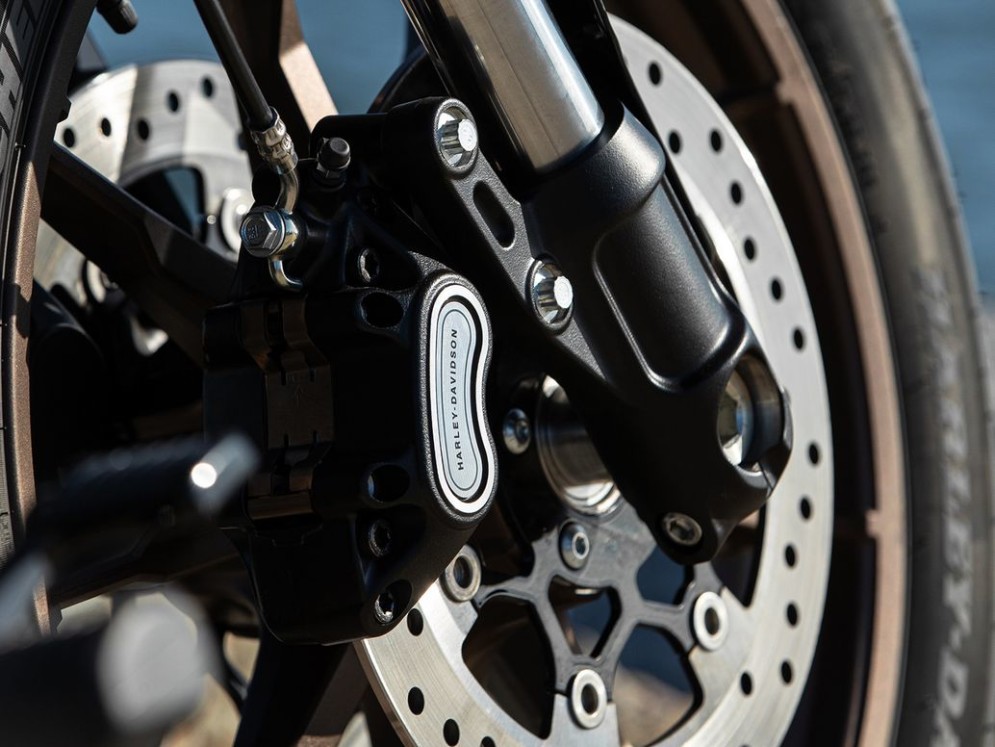 But I was looking for the answer to my first question framed in terms of new-versus-old ride quality, and luckily I didn’t have to wait long for the answer, which came midway through our route on a long series of double-jointed switchbacks cutting down the forested hillsides.

Off the kickstand you can feel every one of the LRS’s 690 pounds, but leaning it into corner required way less drama than expected, no doubt thanks to the inverted fork, steeper rake, and lighter wheels. The stiffer chassis also made for more planted feel and stable corner exits, while the monoshock held its own even at the stock settings, staying composed in all but the gnarliest potholes. I don’t remember bottoming out even once and rebound was nicely controlled, which was pretty surprising given the emulsion shock has just 4.4 inches of travel (this is the low version of the Softail shock options, with hydraulic preload adjustment).

I also got the chance to test the four-piston, dual-disc/ABS brakes in hard stops more than once, and while I wished for a little less lever effort, I had no complaint with feel or the end result—the S came to a controlled and quick stop every time. ABS is standard, but the brakes aren’t linked, and the rear brake isn’t exactly powerful or responsive, with a long travel before engagement. 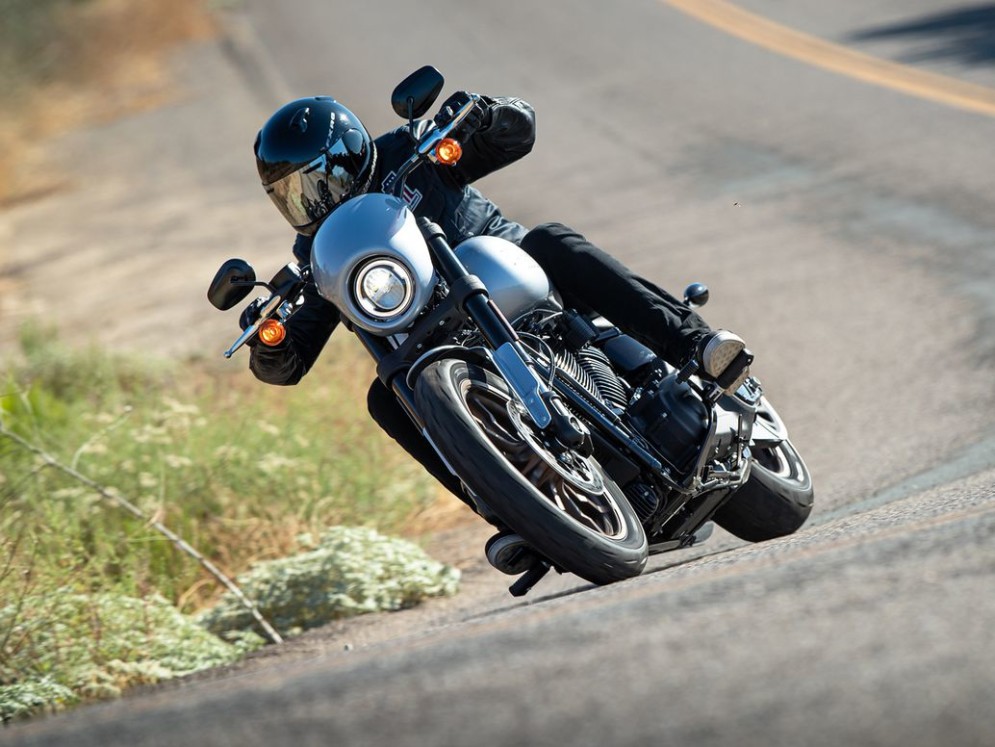 The aggressive riding position and mid-mount controls also made twisties that much more approachable and most riders fit aboard quite easily, but we did eventually start to feel its limitations, especially as the day wore on. Because the seat is fairly low relative to the pegs, those with longer legs—and even 30-inch inseams like mine—would get a bit folded up. After about an hour or so I could feel some strain on my hip flexors, though I had to admit the forward arm positioning and taller handlebar bend were a great fit for my particular riding style. I’m thinking the taller shock option (as on the Fat Bob) or slightly more forward pegs would benefit taller riders if they’re looking for more room. 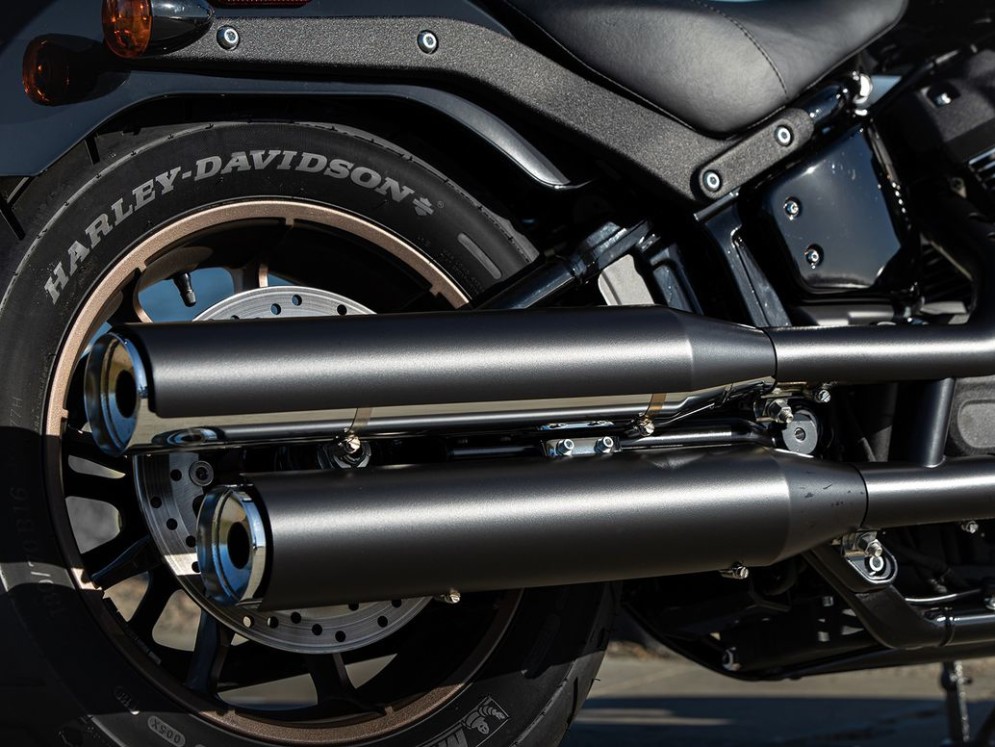 In sum, the newest Softail is a welcome—and needed—addition to the line. The word “Softail” may still seem like a betrayal to some small slice of the Harley faithful, but it shouldn’t: The new platform is, by any measure, objectively better and more appropriate to the Low Rider S’s sporting pretensions while still honoring the style and intent of the original. 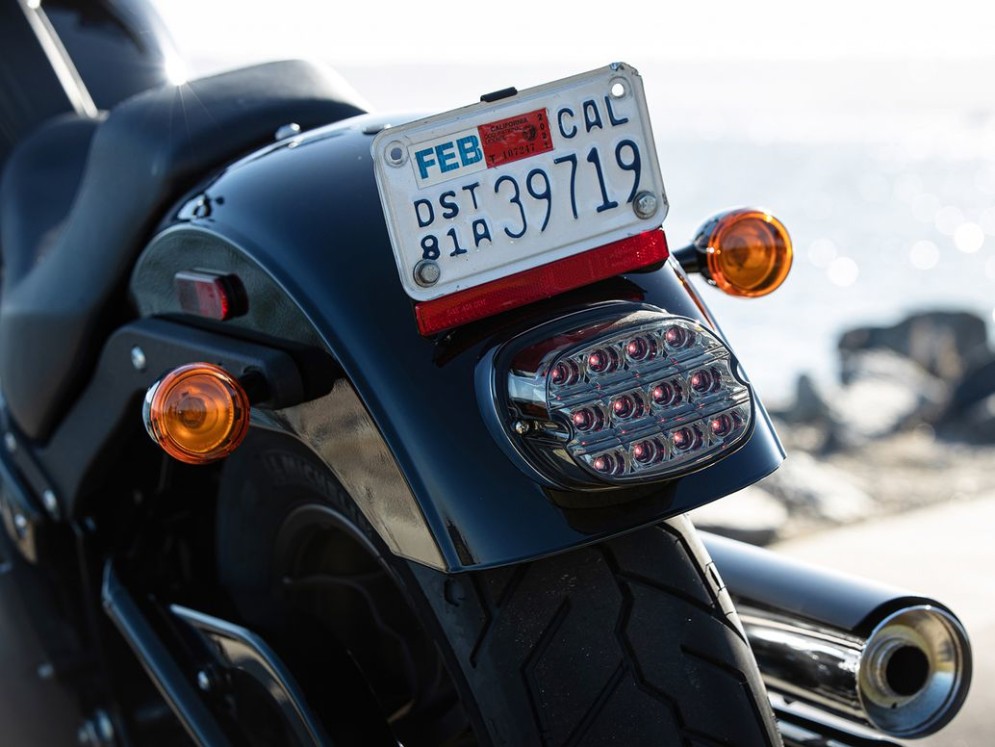 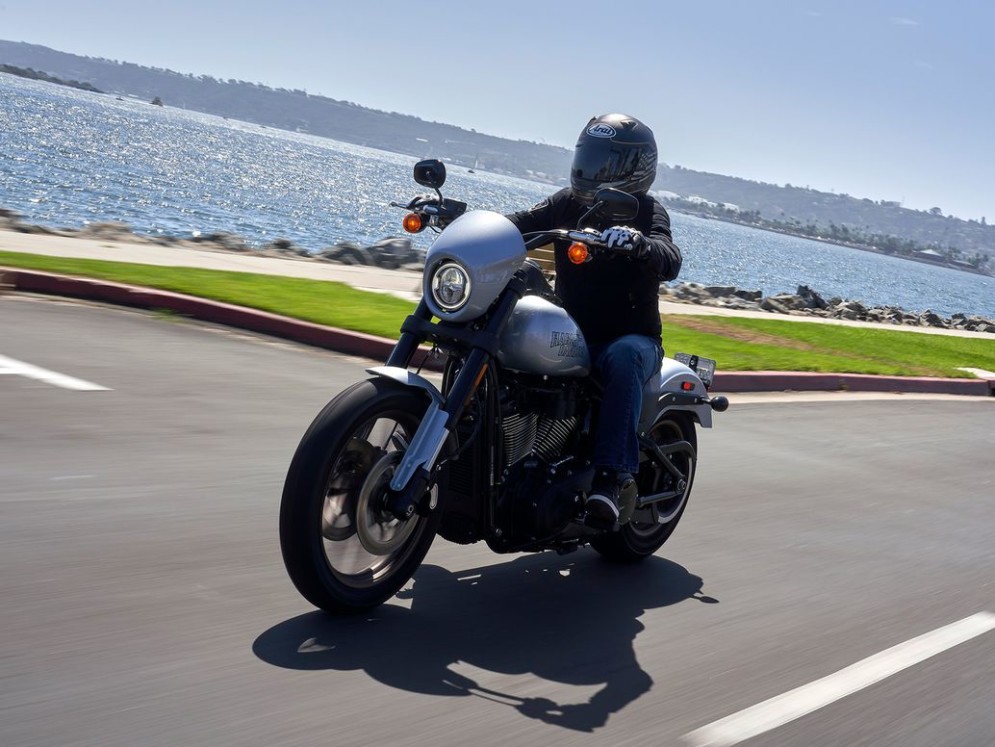