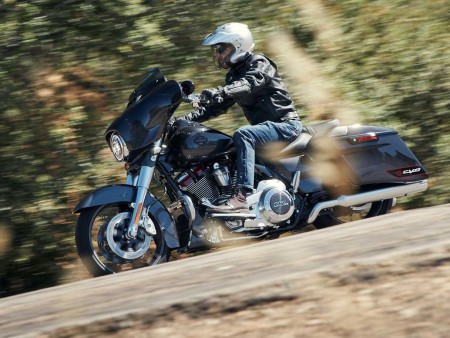 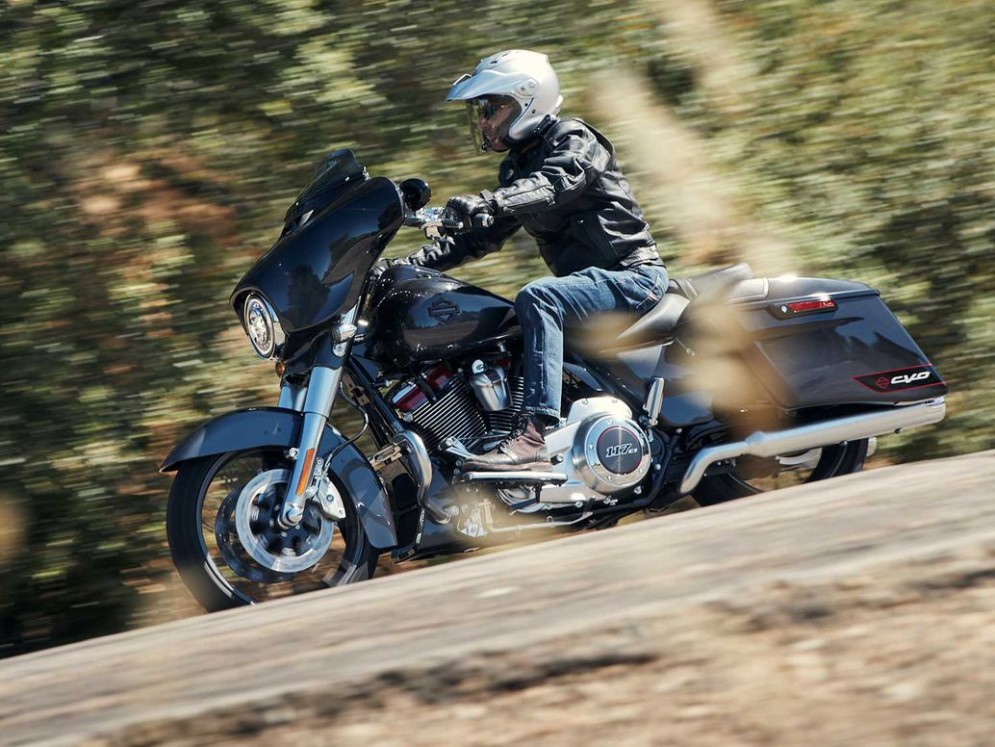 The most popular V-twin in America gets blinged out with a bigger motor, high-tech electronics, and deep paint to create this new CVO Street Glide, seen here in its Black Stardust Fade to Stormcloud colorway highlighted by Satin Chrome and Bright Chrome finishes.

What we're looking at here is the coolest version of America's most popular large-displacement motorcycle, Harley-Davidson's batwinged juggernaut, the Street Glide. It's been a top seller since it debuted in 2006 as a chopped and pared-down touring bike, and its charm to V-twin cruiser enthusiasts never seems to fade. You'll see more batwing fairings in Sturgis than you'll see bats in Austin, Texas.

Baggers like the Street Glide have become the new "customs"—platforms for personalization like paint, sound systems, and high-end finish detailing. Harley's Custom Vehicle Operations (CVO) allows well-heeled aficionados to short-cut the process and buy a hot-rod bagger straight off the showroom floor.

According to H-D's PR flacks, the CVO Street Glide "is a pavement-hugging, premium hot-rod bagger that combines muscular performance, insane custom detailing, and an outrageous audio system." Other than the hyperbolic adjectives, we're happy to report that statement is mostly accurate. 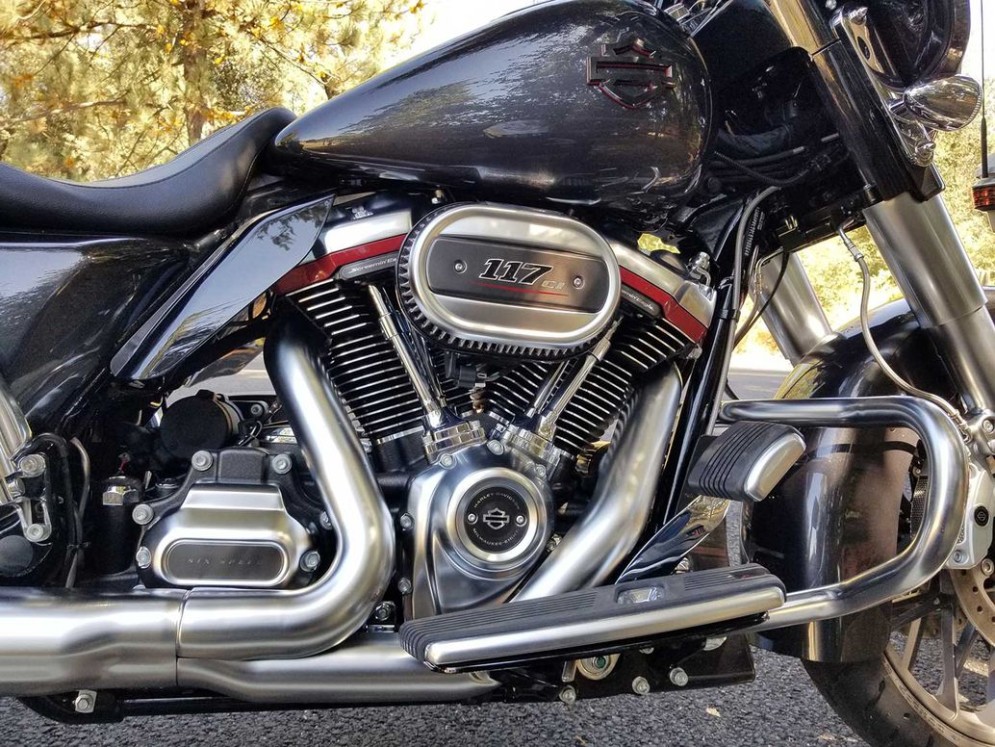 The CVO Street Glide’s Milwaukee-Eight is a thing of beauty, with sultry high-end finishes everywhere you look. Note the rich-looking Black Onyx and Smoked Satin Chrome accents and the splash of red across the cylinder heads. The open-element Ventilator air cleaner seen here is distinct from the Heavy Breather intake on the two other colorway options for the CVO SG.

The latest CVO Street Glide boasts the 117ci Milwaukee-Eight, an engine only available in CVO models and the biggest factory-installed engine available from the MoCo. With a hulking 1,923cc of brawn, torque is king, rated by H-D at 125 pound-feet of max twist.

The 117 is a magnificent cruiser engine, with gobs of torque available at a whim, regardless of rpm. Bonus points for throwing less heat on a rider than Indian's also-burly Thunder Stroke motor. Clutch action is remarkably light, and swapping gears is quite smooth. Downshifts are eased by Harley's new drag-torque slip control, which handily raises engine revs when the electronics sense an excess of load through the driveline.

This electronic slipper clutch of sorts is part of the H-D's Reflex Defensive Rider Systems (RDRS), which includes a cornering linked braking system, cornering ABS, traction control, and a hill-holding function. RDRS is standard equipment on CVO models and is available as an option on H-D's touring models. 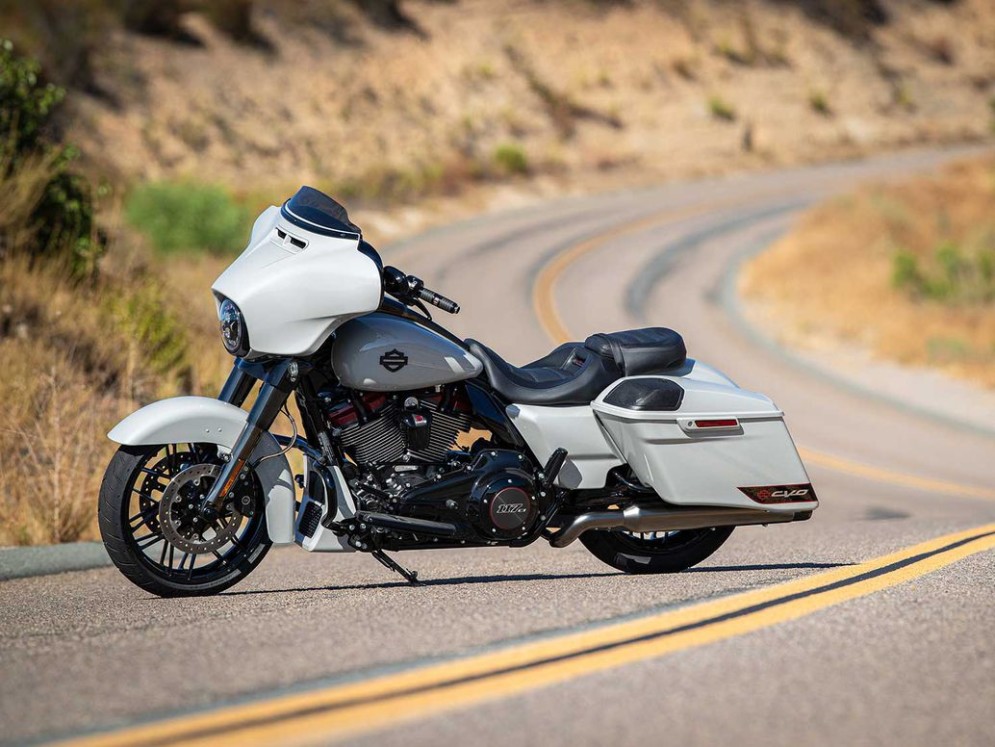 More standard technology is found in the H-D Connect service that links CVOs to smartphones to monitor bike stats or be alerted to tampering. A Bluetooth helmet headset is also delivered with the CVOs, and this links to the stellar Boom! Box GTS infotainment system, which is as good as moto audio gets. The instrumentation is attractive, but some of the smaller numerals are difficult to read.

This top-line Street Glide handles with the relative ease SGs have become known for, responding like a machine that weighs much less than its 866-pound ready-to-ride mass (with its 6.0-gallon fuel tank full) might suggest. A relatively short wheelbase ensures easy handling in urban environments, and it can be hustled through twisty roads with an alacrity that can surprise riders of sportier motorbikes. It’s very nearly flickable, able to be precisely cranked to its 31/32-degree (left/right) lean angles with confidence.

Riders desiring greater lean angles have the option of fitting the longer rear dampers as equipped on the Electra Glide Ultra, which increases available angles of dangle a few degrees and extends rear suspension travel from 2.2 to 3.0 inches. The vast majority of SG customers, however, prefer the slammed look. 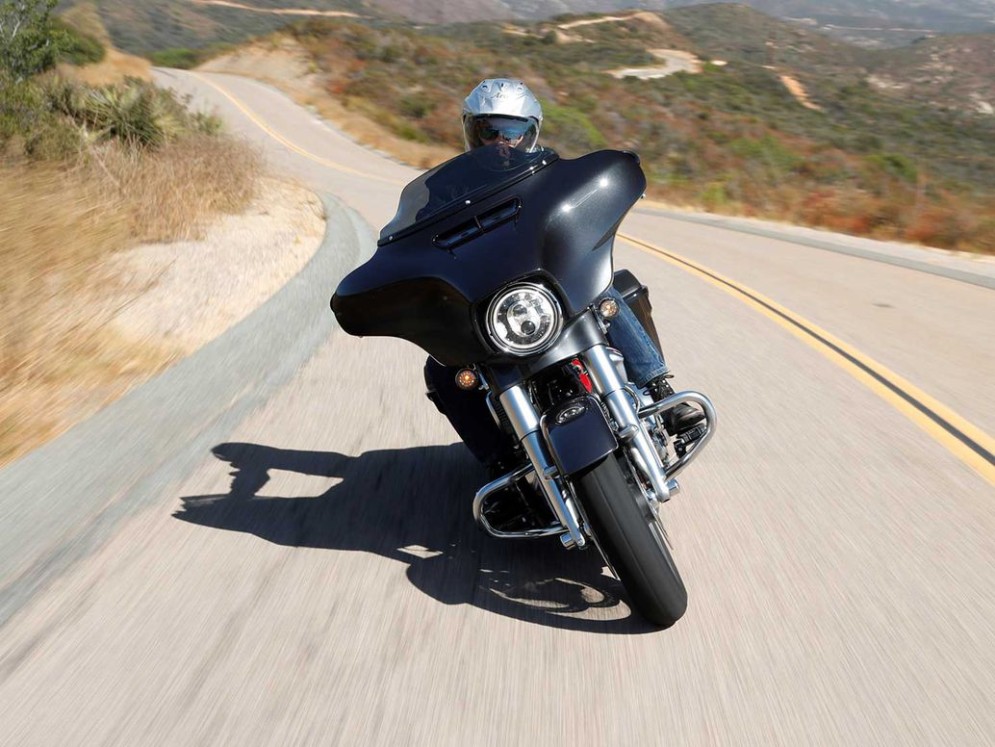 The iconic batwing fairing cradles a Daymaker Adaptive LED Headlamp that features 12 additional LEDs that project light into corners based on the lean of the bike. It activates in both high- and low-beam settings and is augmented by an LED outer ring that operates as a position lamp. The contoured windshield slope on the CVO is much better at deflecting wind than the basic piece on standard Street Glides.

Brakes are another strong point of the Street Glide, boasting Brembo four-piston calipers front and rear. The linked function operates only above 25 mph to eliminate unexpected brake applications at low speeds while operating seamlessly at higher velocities.

As a stripped-down touring bike, the Street Glide's luggage capacity is limited to the saddlebags that offer 2.4 cubic feet of capacity. A popular way to expand touring capabilities is to purchase H-D's "four-point docking kit" (hardware mostly hidden) that enables adding items such as a detachable Tour-Pak and sissy bar/backrest options.

Touring riders will bemoan the Street Glide’s modest cargo room and its diminutive rear suspension travel, but both those aspects are a significant part of the SG’s appeal for riders who use their bikes mostly locally. 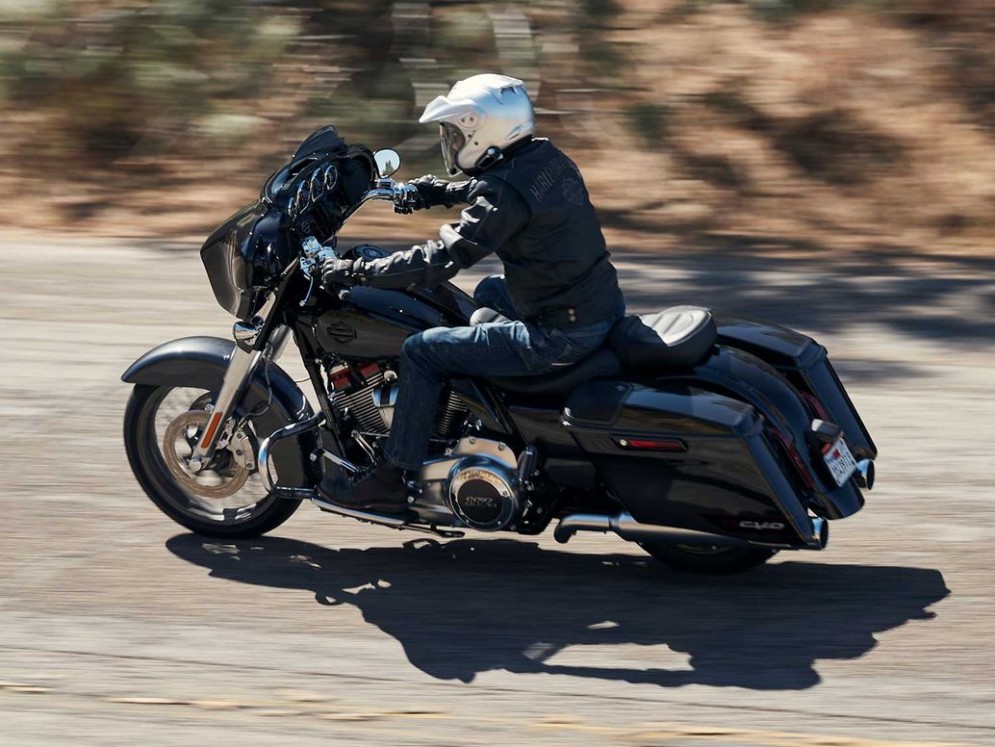 The Street Glide’s neutral ergonomics are a strong point whether chasing horizons or just a caffé Americano.

With an MSRP of a lofty $40,539, the CVO Street Glide certainly ain’t cheap. However, if you added up the costs of all the upgrades over a regular SG—like the hot-rodded motor, the exquisite finish detailing, and the rich paintwork—it would cost much more to replicate it from a regular SG. To H-D’s alpha-type CVO customers, it’s a relative bargain compared to doing all the mods yourself.